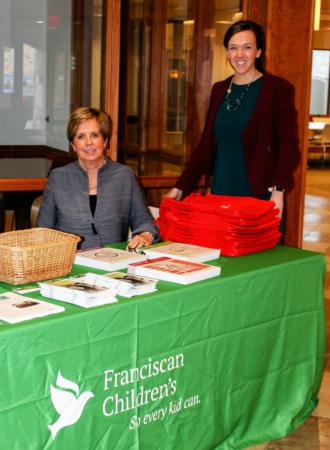 Carol Nash and Patricia Coffey of the Kids Healthy Minds Initiative, a partnership between the Archdiocese of Boston and Franciscan Children's Hospital. Courtesy photo

BRIGHTON -- The Kids Healthy Minds Initiative began in late 2017 as a partnership between the archdiocese and Franciscan Children's Hospital. Since its inception, the Initiative has brought about 60 presentations to parishes and schools in the archdiocese, educating communities on how to address mental illness and prevent suicide among youth.

In an April 22 interview with the Pilot, Carol Nash, the director of the Initiative and director of Franciscan Children's Hospital's Mental Health Research Program, said that most people do not realize how prevalent mental illness is among youth.

"One in five children have a mental illness, and the downstream effects of not detecting it early are devastating," she said.

According to Nash, the idea for the partnership came about when Cardinal Seán O'Malley attended a Franciscan Children's gala. After hearing about the rising rates of youth mental illness and suicide, he sent archdiocese staff to work with the hospital to organize a mental health education program, the Kids Healthy Minds Initiative.

The hospital brought on Patricia Coffey, a licensed independent clinical social worker (LICSW), to be part of the Initiative. She specializes in trauma and cognitive behavioral therapy and has experience working with youth in Boston Public Schools and the Home for Little Wanderers.

"I've realized the impact of mental health, the stigma around mental illness in general, and how this creates barriers for youth and families to access treatment. So, when this landed for me at Franciscan Children's, I was really excited to see that this message could be disseminated across the Archdiocese of Boston," Coffey said April 24.

Coffey gives free, hour-long presentations in parishes and schools. Many attendees are parents and teachers, but some come from a variety of occupations. She talks about symptoms of mental illness, common diagnoses, warning signs of suicide, protective factors (including religious faith), preventative measures, and how to have conversations about these topics.

"The diocese is being tremendously supportive. They are helping us open the doors to get into parishes and to get into Catholic schools throughout the entire diocese," Coffey said.

Nash said they hope to remove the stigma associated with mental illness and "dispel some of the myths and misconceptions surrounding mental illness."

Coffey said one such myth is that if people talk about suicide prevention, it will plant the idea of suicide among youth. Coffey said academic literature says otherwise.

"The data has shown that if we don't talk about it, we actually are isolating the kids that are suffering, that do have suicidal ideation, because they feel like they can't reach out and talk to anyone, and that the silence increases risk," she said.

Nash said the feedback from attendees "has been outstanding," and that there is always a line of people who want to talk to Coffey after hearing her presentation. Coffey said many attendees tell her that they wish they had learned this information when they were growing up.

"I want parents and teachers and grandparents to feel empowered to have difficult conversations with kids about suicide, about social media, about developing relationships, and about faith," Coffey said.

She said the initiative had initially planned to give presentations in schools during their second year, but they have already been invited to many.

"We were pleasantly surprised (by) how many schools were eager for us to come in and talk to their faculty," she said.

After giving her presentation in a community, Coffey provides ongoing consultation to attendees who reach out to her later with questions or requests for resources or referrals.

"We're definitely looking forward to reaching all the Catholic schools and ideally all the parishes that are open to our program," Coffey said.

Those interested in learning more about the Kids Healthy Minds Initiative or scheduling an education program for their parish or school can email KidsHealthyMinds@FranciscanChildrens.org.