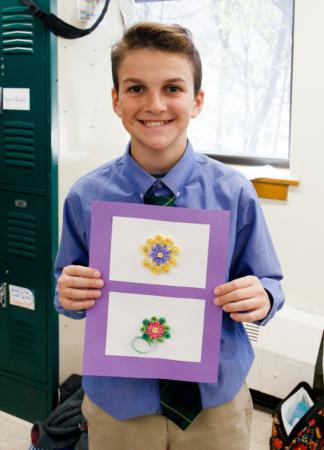 FRAMINGHAM -- The middle school students at St. Bridget School in Framingham do not know when they will receive the list of electives available in the next trimester. When the moment comes, they are told to silently read the options and rank their top three preferences. This eliminates any opportunity to consult with their peers and sign up for the same classes as their friends. Instead, the electives mix grades six, seven, and eight, bringing together students of different ages who have similar interests.

The electives rotate by trimester, so each student takes three electives throughout the academic year. In past school years, electives topics have included veterinary science, a stock market challenge, and sign language. The options always include a type of art; the latest being caricatures and quilling (also called paper filigree). In this year's "Around the World in 80 Days" elective, students research different cultures and present plans for imaginary trips. There are no tests or grades, so as not to add more to students' workload.

She said it has two objectives: to help students make friends outside their usual peer groups, and to expose students to fields that they might not otherwise learn about until high school or college.

"A comment that you hear a lot in classrooms with students is, 'When are we ever going to use this? Why is this important?' They just don't see the impact that this is having, what they're learning right now, is going to mean anything in their life," Chaves said when the Pilot visited the school on Nov. 15.

She wanted to give students opportunities to find new areas of interest, make friends based on their interests, and begin acquiring the knowledge they might need in order to go forward in those areas later in their studies or careers.

Chaves asked the teachers of St. Bridget School to think of topics they could teach as electives.

Language arts teacher Laurie Woodworth had been using TED Talk videos in some of her classes, and offered to teach an elective about public speaking. In it, students watch TED Talks about public speaking, analyze and critique the speakers in the videos, and do improvisational exercises. Woodworth said students who were scared or embarrassed at the beginning of the class are now eager to participate.

"It's really given the kids the confidence and then just the different things they can do when they're speaking to get people to, one, listen to them, but two, to use their voice as an instrument and to be cognizant of volume, speed, pitch, all those things," Woodworth said.

Semima Karasch, a math and religion teacher from Tonga, has taught electives for several different topics, including quilling, juggling, the stock market, and the math involved in kite-making. She has also taught a class about Tongan culture, in which students ate Tongan food and learned a traditional song and dance.

Parents and local community members also volunteer to teach students about their areas of expertise. For example, Frank Schiappa, a retired CPA and a member of the school board and parish finance council, teaches an accounting elective.

Taylor, an eighth-grade student, signed up for the improv theatre elective last year, but was not able to take it until this year.

"I'm very quiet and I sometimes have trouble with public speaking, so (I thought) this would be really good for me," Taylor said.

She said that both she and the teacher have seen "a big improvement."

"You're supposed to be really extra and big. It's a lot of fun," she said.

Technology teacher Robert Valois teaches an elective in video game design. Unlike most of the electives, this one is restricted to eighth grade, since the students need to have a basic understanding of scientific concepts.

"This is actually something I used to teach at the high school level, and the first time we did it here was kind of an experiment to see if the eighth grade could get the concepts," Valois said. Most of them did very well, so he has continued to offer the course.

Jack, an eighth-grade student in Valois' class, has been interested in video games for years and saw the class as an opportunity to get started making his own. He plans to continue studying it at a high school with a good science and engineering program.

"It's been a challenge, but it's also been really fun and it's taught me a lot," he said.