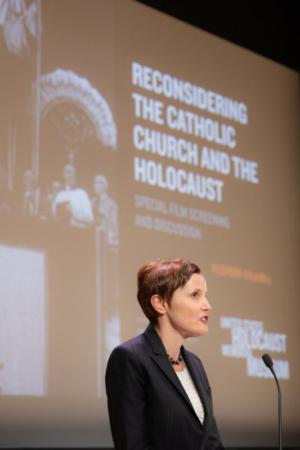 WASHINGTON (CNS) -- Suzanne Brown-Fleming was on a track to the kind of career she wanted.

After having been educated in Catholic schools in the Virginia suburbs of Washington for 12 years, she flourished further in her undergraduate and graduate studies in college, and was quite close to finishing her doctoral dissertation in modern German history.

Then she and a group of other doctoral students from the University of Maryland embarked on a trip to Germany for their Ph.D. work.

"A friend who was Jewish, we were both in the same Ph.D. program. She was really the first person I knew in-depth who was Jewish. We were in Germany in this program, traveling near the former concentration camp at Buchenwald," Brown-Fleming recalled. "She wanted to visit." The exhibitions about Jews' experiences in the camp had not yet been redone since the fall of the Berlin Wall, "and she got emotional about that."

Yet for someone who was a student of modern German history, "the topic was a shock to me, after 25 years of being an active Catholic, half-German and going to Catholic schools," she told Catholic News Service in a Dec. 6 telephone interview.

For Brown-Fleming, "it's part of a journey -- a 25-year journey -- where I started asking questions that I had never even thought about," she said. She is now director of international academic programs at the U.S. Holocaust Memorial Museum's Jack, Joseph and Morton Mandel Center for Advanced Holocaust Studies.

But first, Brown-Fleming had to shift gears.

Since the Holocaust is in many ways still inexplicable, "I said, 'I wanna know what the Catholic Church said it did after the Holocaust. I want to change my dissertation.' He said OK. And so I sort of had to self-teach. I was all the way through my Ph.D. coursework and was on my way through a Ph.D. dissertation totally unrelated to the Holocaust."

Brown-Fleming learned of a collection at The Catholic University of America, Washington. "I ended up at the Catholic U. collection of the German papal diplomat to Germany (Cardinal Aloisius Muench). He was the recipient of tens of thousands of letters from German Catholics describing their view on Nazism, the victims of Nazism."

And the German side of her family? After doing some research, she said, she learned "my family had some very strong ties to Nazism. They left their church for their new religion of Nazism."

Still a practicing Catholic -- her daughters attend the same Catholic high school she did -- Brown-Fleming said she has also learned that, as a Catholic, "you are to love other people as yourself. You are to give to the least of your brothers. Not all, but many Catholics and Christians (in Germany) totally failed in that mission.

"And now the question for me is: Well, that's heartbreaking. But why? Why did their faith not sustain them, or more of them, or at least a majority of them, to respond and behave differently? And what about church leadership in Rome and the United States, what animated the decisions they made?" she asked.

After 20 years reading details of the Holocaust, "by those of us who are still practicing (their faith) and are left to answer the questions of why the church did or did not do this or that," Brown-Fleming said, "I am left finding out that I don't have a good answer."

Some answers may be in store, though. The Vatican Secret Archives are unsealing come spring documents on Pope Pius XII, whose papacy covered the World War II years, and who, prior to that, spent a decade as Vatican secretary of state, dealing with both Germany and Italy.

There may be a million pages of documents, and perhaps more. How will researchers sift through it without duplicating others' efforts?

"They're talking about exactly that question, how to build the right networks," Brown-Fleming told CNS. "Pope Francis himself, when he made this opening up of its archives, said the church is not afraid of history." She added, "We don't believe in prejudged outcomes."

Brown-Fleming wanted to correct one mistaken notion: "Everyone thinks there are just one archive. Actually, there are seven different archives across Vatican City, all of which have documents potentially relevant to the Holocaust. The Vatican Apostolic Archive is one of the largest. The rules (for this particular archive) are any single researcher can stay for up to three months at a given time."

She said, "We've had a very positive relationship in the past with the church," thinking back to 2006, when documents relating to Pope Pius XI's papacy were made available. "We were able to make copies, and have partial copies available in Washington, D.C.," Brown-Fleming added. "We'll certainly hope for that good luck again."