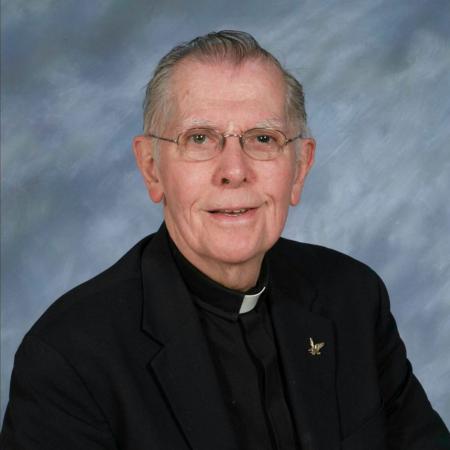 Father Gerard L. Dorgan, a former professor of English Literature at Cardinal O'Connell Seminary, Jamaica Plain, and St. Clement Hall, Brighton; and a professor of homiletics at the theology department of St. John Seminary, Brighton, died after a protracted period of declining health. He had just turned 86 in October.

Born in Peabody on Oct. 12, 1933, he was the youngest and sole surviving child of the late Timothy and Marion (McBride) Dorgan. He was raised in St. John the Baptist Parish and attended the parish grammar school before commuting to nearby St. John Prep in Danvers for high school. Following graduation from the Prep, he went to the College of the Holy Cross in Worcester before entering the archdiocesan seminaries, first at Cardinal O'Connell in Jamaica Plain and then at St. John, Brighton. Places that would be very familiar in his priestly ministry.

Archbishop Richard Cushing ordained him to the priesthood at Holy Cross Cathedral on Feb. 3, 1958. It was the last class ordained before the archbishop was made a cardinal by Pope St. John XXIII in December of that year.

His first and very brief assignment was as an assistant at St. Margaret Mary, Westwood where here served form ordination until September of 1958 when he was recalled to Cardinal O'Connell Seminary, where he would serve for the next 12 years, and then moved in 1970 to the faculty of St. John Seminary, Brighton, serving for 21 years. That he would have taught hundreds of Boston priests in one or the other of those seminaries would be no exaggeration. One of his former students said of him "he humanized the seminary experience."

During his seminary tenure as faculty member, he taught English literature in the College division and Homiletics II at the Theologate. He had a special focus on American Literature and especially the poetry of Emily Dickinson.

Those who elected him for Homiletics II (Homiletics I was more about mechanics and public speaking) found him both demanding and understanding. He gave sound advice and was especially emphatic about biblically based content; use of other literature and NOT reading prepared texts. He only permitted an index card with three sentences to be brought to class for your classroom homilies. "If you can't remember it, why should your hearers."

During the latter seminary faculty years, he became immersed in the Charismatic Renewal Movement and was the archdiocesan liaison for many years.

When he retired from "priestly formation" in 1991, he was named pastor of St. Mary of the Annunciation Parish in Danvers; a parish with which he was very familiar as he had been weekend assistant there from 1976 to 1991; having previously served as weekend assistant from early faculty years at St. James, Salem. North Shore oriented solemnly assured!

For the next 21 years, he served the Danvers parish and the town of Danvers with zeal and joy. His people appreciated and remembers his homilies, carefully crafted and delivered with sincere emotion. His Homiletics II alumni would appreciate the "do as I do, not just as I say" example.

The Xaverian Brothers at his alma mater, St. John Prep, were especially proud of him but more appreciative of his attention to them during his years as their pastor. He received the Distinguished Alumnus Award in 2008.

He "retired" from the pastorate of St. Mary on June 5, 2012; but remained very active in the area, assisting at parish Masses and at the same time caring for his older sister, both living at the family home on "Buttonwood Lane, Peabody."

Following his sister's death, he remained briefly in Peabody, but as his health declined he retired to Youville Place, Lexington; then to Hathorne Hill, Danvers, and to Care Dimensions, Danvers.

Father Dorgan died on Dec. 5, 2019 in Danvers. His Funeral Mass was celebrated at St. Mary of the Annunciation on Dec. 13. Cardinal Seán O'Malley was the principal celebrant and his onetime parochial vicar, North Regional Bishop Mark O'Connell was the homilist; among those concelebrating the Mass were Father Dorgan's successor at Danvers (and fellow Prep alumnus) Father Michael J. Doyle; and Msgr. Fredrick J. Murphy, senior priest at Danvers; classmate and long-time fellow faculty member at Jamaica Plain and Brighton.