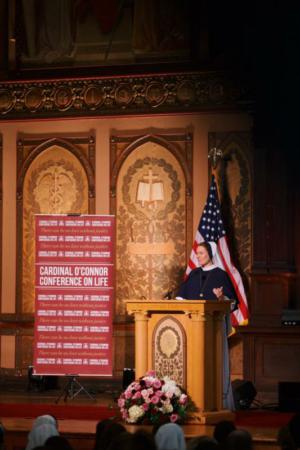 WASHINGTON (CNS) -- In a politically charged election year, Catholic parishes aren't immune to the animus in the air.

But it's important to remind people in Catholic communities of their faith, the shared belief in a loving Christ, and that is more important than any political party they may belong to, said church workers sharing best practices for building bridges in faith communities.

They made the comments during a panel Jan. 26 at the Catholic Social Ministry Gathering in Washington.

"It's important to model good behavior," said Kathleen Domingo, senior director of the Office of Life, Justice and Peace for the Archdiocese of Los Angeles, who admitted that she's had to, on at least one occasion, "put my body in between two people."

Domingo was one of four panelists who discussed how to build bridges among faith communities dealing with life and justice issues, particularly when some of those issues can take on a political hue, even though they're rooted in the Gospel.

"It takes time," she said, but it's important to get groups talking to each other, interacting with one another.

But sometimes, it's hard to involve some groups, including groups of youth here without documents, and their families, who may feel particularly threatened because of the present rhetoric in the country, said panelist Wayne E. Romo, director of university ministry at St. Mary's University in San Antonio.

He said he tries to focus the population with whom he comes into contact not to think necessarily about what they can do but "what they can be to contribute to the life of the church."

It's not an easy existence, he said, given "the climate we're dealing with."

For some, it's difficult to figure out "where do I belong?" when they hear from others, "You're not part of us," he said.

But it's important to encourage them, particularly those who may feel like outcasts, to contemplate, "Who am I as a child of God and how do I contribute?" he said.

Sister Anne Victory, who is on the board of directors and is the chairperson for U.S. Catholic Sisters Against Human Trafficking, said an important part of bridge building is collaboration and education. Interacting with different organizations at the local level is important, she said. And there are many opportunities to contribute, though not every opportunity may bring a person to the front lines of a community.

"We're not going to be the direct caregivers, but we can educate," said Sister Victory, a member of the Sisters of the Humility of Mary, adding that getting all groups talking takes effort and "persistent inviting to get people to the table," but it's important to bring a diverse group of people together.

F. DeKarlos Blackmon, director of the Secretariat of Life, Charity and Justice for the Diocese of Austin, Texas, said it becomes important to invite members of different offices or groups to attend key events in the ministry of others. For example, he said in his diocese, many offices were invited to become familiar with the Encuentro process aimed at bringing more Latinos into the life of the church in the U.S.

"All offices were involved," he said.

Likewise, if there are events important, for example, in the pro-life movement, there's an encouragement to others involved in charity and social justice to accompany and learn. Many times there can be positive interactions, he said.

"We need to do a better job uniting," he said.

But it's apparent that in a year that brings with it a contentious presidential election, the business of building bridges for Catholics of different beliefs must be rooted in what's shared, said Domingo, and how leadership models behavior in this aspect also is important, she added.