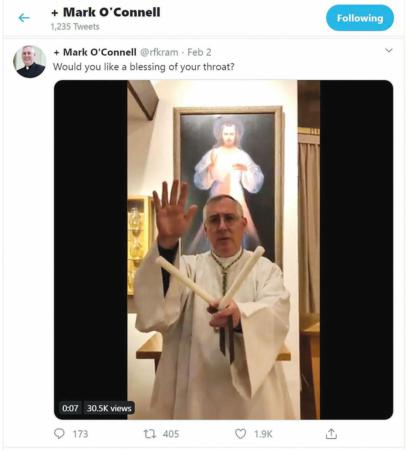 A screen shot of Bishop Mark O'Connell's Twitter page, through which he offered a blessing of the throat for the feast of St. Blaise. Pilot photo/courtesy Twitter @rfkram

NORTH READING -- The tradition of receiving a blessing of the throat on the feast of St. Blaise, Feb. 3, is popular among many Catholics but not always available at parishes. That gave Bishop Mark O'Connell an idea: why not post the blessing to Twitter?

The tradition of blessing throats on St. Blaise's feast day has as its origin a legend that the saint miraculously healed a boy who was choking on a fishbone.

Because the feast fell on a Monday this year, the blessing of throats was also offered at Sunday Masses in some parishes.

Bishop O'Connell, who is the pastor of St. Theresa Parish in North Reading as well as the bishop of the North Region of the archdiocese, had the idea to film himself reciting the blessing.

"I was at church, and I had this thought, because people like that blessing so much and I like giving it so much," he said Feb. 7.

He said he felt "compelled" and attributed the idea to the inspiration of the Holy Spirit.

Within a week, the post was seen by over 90,000 people, and over 10,000 Twitter users engaged with it in some way. It was retweeted over 400 times and received almost 2,000 likes. Bishop O'Connell said over 180 people subscribed to follow his Twitter account after he posted the video.

Many Twitter users left positive comments on the post, thanking Bishop O'Connell for sharing the video and praising his use of social media for evangelization.

The video was especially appreciated by Catholics who said they had not been able to receive such a blessing in person due to travel, health problems, lack of time, or lack of opportunity in their community.

"Thank you! I am sick with throat infection (3 days). I was hoping they would do the blessing of the throat at our parish but they didn't," one Twitter user commented on the video.

While expressing their gratitude for the post, a few commenters also questioned whether one can receive a blessing through an internet video.

Though watching a video of a blessing through the internet is not the same as receiving one in person, Bishop O'Connell likened it to the blessing given at the end of a televised Mass. He said the important thing was the intention behind it, and that his intention was for everyone who would see the video.

"What people guard are the sacraments. This is a sacramental," Bishop O'Connell said.

Ever the canon lawyer, he pointed to the Code of Canon Law, which defines sacramentals as "sacred signs by which effects, especially spiritual effects, are signified in some imitation of the sacraments and are obtained through the intercession of the Church" (c. 1166).

Bishop O'Connell also noted that non-Catholics, though barred from such sacraments as the Eucharist, can receive blessings and sacramentals, such as ashes on Ash Wednesday.

In his view, he said, "we need to be generous with sacramentals."