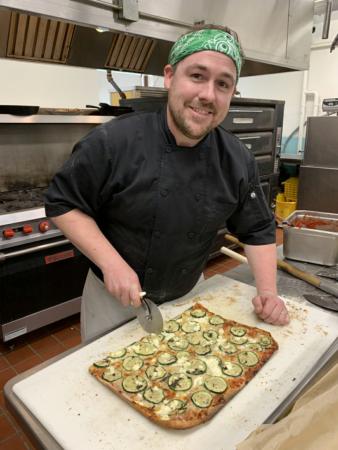 CAMBRIDGE -- When Doug Pollander graduated from St. Peter School in 1998, he had no idea he would someday return as a staff member.

Six years ago, Pollander was working at a restaurant in Boston's Seaport District when the father of a friend from his graduating class reached out to him about a work opportunity as a chef for St. Peter School.

Taking the job as school chef was "one of the greatest decisions I ever made," Pollander said Feb. 7.

Pollander said he was surprised by the amount of creative freedom the school gave him, as well as the warmth of the community. That kind of environment was "almost like culture shock" after working at a restaurant, where food service had to be "fast and perfect."

St. Peter School has almost 200 students from pre-K through grade eight. Pollander estimated that he serves lunch to between 120 and 140 students each day.

"I pretty much do anything food-related (for) the school," Pollander said.

This includes planning and preparing lunch, teaching cooking classes after school, and helping to plan a school garden.

Pollander said it is nice to know that his lunches help students branch out in their food choices. He considers it a "win" when students "venture outside their comfort zone" by trying new foods.

"I like turning them onto new things that they would never even think to try," he said.

Each month's menu plan can be viewed on the school's website. Pollander said he tries not to repeat any meals in a month. He said he prepares most of the food from scratch and prefers to make simple, good quality meals with limited ingredients.

When he makes ethnic food from different cultures, he aims to prepare dishes "the way they were intended to be made or traditionally made." He also plans meals related to upcoming holidays, such as a turkey dinner before Thanksgiving, or corned beef and cabbage for St. Patrick's Day.

"I've gotten great feedback from the kids and the parents, and it's such a nice place to work. I love it," Pollander said.

The school is in the beginning stages of planning a garden, which could provide fresh vegetables for use in school lunches. Pollander said there would be "many different possibilities" for connecting the garden to different academic subjects, and that he would like to start by having a garden club as an after-school activity for students.

"I'm not a master gardener by any means, but I really would like to get better at it and learn more about it," he said.

When asked what his favorite thing about working at St. Peter School is, Pollander answered, "The community."

"Everybody is so supportive of one another. Whenever somebody is going through something or having a hard time, everybody is right there to help you," he said.

When he was in the seventh grade, he said, his father passed away over the summer. When school resumed, one of his teachers started a program for students who had experienced loss, such as divorce or a death in the family.

"It was a really nice thing for them to do. I'll never forget those things," Pollander said.