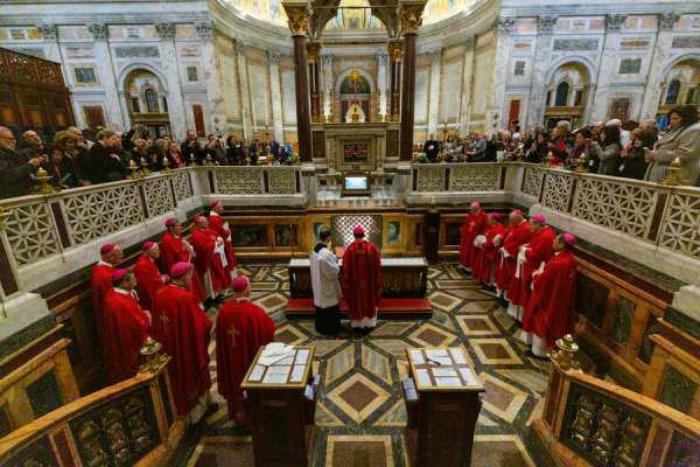 Vatican City, Feb 20, 2020 CNA.- During a private meeting with bishops from the southwestern United States, Pope Francis talked about his 2019 meeting with Fr. James Martin, SJ, and about pastoral care and assisted suicide.

The pope met Feb. 10 for more than two hours with bishops from New Mexico, Arizona, Colorado, Utah, and Wyoming.

Several bishops present at the meeting told CNA that in addition to discussions about his then-pending exhortation on the Amazon region, and on the challenges of transgenderism and gender ideology, Pope Francis discussed his Sept. 30 meeting with Martin, an American Jesuit who is well-known for speaking and writing about the Church’s ministry to people who identify themselves as LGBT.

Martin met with Pope Francis shortly after a Sept. 19 column by Archbishop Charles Chaput criticized “a pattern of ambiguity” in Martin’s work, which Chaput said “tends to undermine his stated aims, alienating people from the very support they need for authentic human flourishing.”

“I find it necessary to emphasize that Father Martin does not speak with authority on behalf of the Church, and to caution the faithful about some of his claims,” Chaput added.

The meeting between Martin and the pope was taken by some as a response to Chaput’s column.

The meeting took place in a papal library ordinarily reserved for high-level audiences with the pope, which some journalists saw as a significant decision.

“By choosing to meet him in this place, Pope Francis was making a public statement. In some ways, the meeting was the message,” America Magazine reported of the encounter.

But bishops who met with the pope this week said that while Pope Francis had accommodated a request for a meeting with Martin, he was clear with them that he did not intend for it to convey any significance.

In fact, one bishop at the meeting told CNA that Pope Francis has said he “made his displeasure clear” about the way the meeting was interpreted, and framed by some journalists.

"He told us that the matter had been dealt with; that Fr. Martin had been given a 'talking to' and that his superiors had also been spoken to and made the situation perfectly clear to him," another bishop said.

"I do not think you will be seeing that picture of him with the pope on his next book cover," the bishop told CNA.

For his part, Martin told CNA Feb. 20 that “I can't comment on what the Holy Father told me, since he asked me not to share the details with the media, other than to say that I felt profoundly inspired, consoled and encouraged by our half-hour audience in the Apostolic Palace, which came at his invitation.”

Two bishops told CNA that Martin’s work in regards to the LGBT community was also discussed with the heads of numerous Vatican congregations, and that some officials expressed concern about aspects of the priest’s work.

According to bishops present at the papal meeting, Pope Francis also spoke about euthanasia, and was asked about comments from Archbishop Vincenzo Paglia, who said at a December symposium that priests should “let go of the rules” in order to be present with people who have initiated assisted suicide.

At the symposium Paglia mentioned that he would be hold the hand of someone dying from assisted suicide, and that he does not see such an action as lending implicit support for the practice.

Pope Francis apparently told bishops that while priests must love mercifully those who have terminal illnesses, they can not “accompany” someone who is in the act of suicide, which the Catholic Church teaches to be gravely immoral.

One bishop told CNA that the same matter was brought up with the heads of Vatican offices, and “they were really clear that what [Paglia] said was a big problem, and that other bishops have brought it up.”

Vatican officials said “you just can’t do that,” a bishop said, in reference to any pastoral action that might seem to imply approval of, or cooperation with, assisted suicide.

Ed Condon contributed to this report.