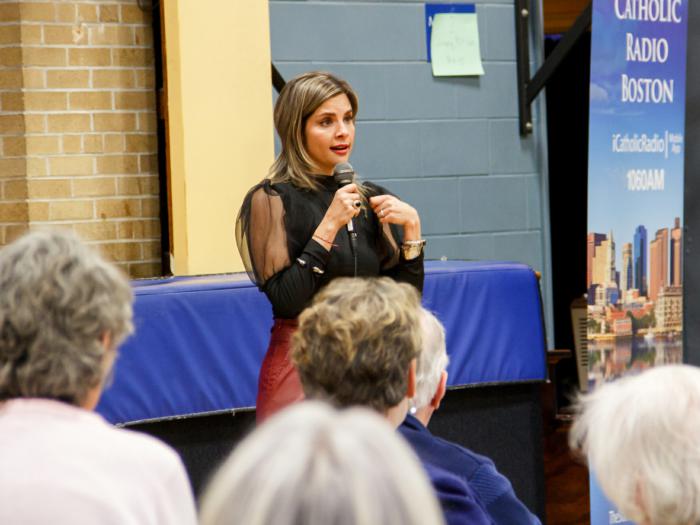 NORWOOD -- Extra chairs had to be fetched to accommodate the huge turnout for the Boston 40 Days for Life campaign launch on Feb. 25.

Sandoval said she was "a victim" of Planned Parenthood three times: "first time in school, second time as a patient, third as an employee."

In sharing the story of her conversion, Sandoval touched on many topics related to abortion, including post-abortion syndrome, the need for parents to teach their children about sex, the impact of abortion on fathers, and the dangers and deceptions of legal abortion.

Sandoval was born in California to Mexican immigrants. When she was in sixth grade, Planned Parenthood employees came to her school to teach her class about "safe sex." They said that a fetus was not a baby until five months' gestation, and they promised to provide confidential help to girls experiencing crisis pregnancies.

"What was really happening," Sandoval said, was "they were looking for future abortion patients."

When she was 19, she began to be sexually active after her friends bullied her for being a virgin. She became pregnant, and though she initially felt "panic" and "terror," her boyfriend was happy and promised to support her and the baby.

"When a man steps up, and he's responsible, and he assures the woman that she is not alone and that he is there and that he will not leave -- that saves so many lives," Sandoval said.

Her friends, however, worried about her future and tried to dissuade her, repeating what they had learned from Planned Parenthood as children. Their words revived her initial fear.

"I do believe that the root of all abortion is fear," Sandoval said.

After the abortion, Sandoval and her boyfriend both suffered emotionally and mentally, having nightmares and mood swings. Despite being on the birth control pill, she became pregnant two more times and had two more abortions at Planned Parenthood. She broke up with her boyfriend shortly after the third abortion.

Sandoval said that although it is not common to hear about women having multiple abortions, it is actually more common than having just one. She said 55 percent of women that have one abortion will later have another.

While job hunting, Sandoval learned that Planned Parenthood was looking to hire a bilingual back office nurse. Though she was not a nurse, Planned Parenthood hired her for the position, saying she would be trained on the job. She was told that 95 percent of the clinic's abortions were for Mexican women who did not speak English, and she needed to motivate them to not miss their appointments.

Before sharing the most gruesome part of her story, Sandoval reflected on how the innocence of the unborn makes them similar to Christ.

"Their martyrdom is the closest thing to Jesus Christ's martyrdom. No sin. No faults. No condemnation," Sandoval said.

She added that "when we hear what happens when they die, we're honoring their martyrdom. They're the saints of our times. And they deserve that dignity."

Sandoval described the protocols she was told to observe while working at Planned Parenthood. She assisted doctors performing abortions, which, to save time and money, could not exceed five minutes. When she saw the process of reassembling aborted fetuses' body parts to make sure each abortion was completed successfully, she realized that she had been deceived about the humanity of her own aborted children.

She worried that if she quit, she would not be able to pay for her apartment, her car, or school. Her tipping point was when a girl who was six months pregnant with twins came in for an abortion Sandoval was supposed to assist with. She left the clinic and never went back.

Sandoval started experimenting with drugs to numb her emotional pain, becoming addicted to the point that she could not work or attend school. For three years, she was homeless, too ashamed to look for her parents, who had always emphasized beauty and success.

One night, she had a fight with her then-boyfriend, who left her on the sidewalk with no food, money, or drugs. At that rock-bottom moment, Sandoval thought about her childhood faith in God. Realizing God was all she had at that moment, she tried praying, thanking him for her beautiful childhood and asking pardon.

A moment later, a young waitress from a nearby restaurant came outside and hugged her. She told Sandoval that God wanted her to know he loved her and forgave her, and she offered to drive her home.

Sandoval reconnected with her mother, who had returned to the Catholic Church after years of exploring New Age spirituality. She said she had been praying for Sandoval for three years. Sandoval emphasized that the prayers of mothers are especially powerful, which is why God exalts his own mother to be the mother and intercessor for the Church.

"I want to tell all you mothers here that your prayers are heard," Sandoval said.

She said that when she went to a Rachel's Vineyard retreat, while she was praying, she saw her three aborted children: a girl she named Mariana; a boy, Emanuel; and a girl, Rosario. They called her "Mother" and said that they loved her and were praying for her. She was able to forgive herself, she said, when she saw that her children forgave her. She then vowed to defend life no matter what obstacles she faced.

Sandoval said she wanted all mothers who had lost children to abortion or miscarriage to know that "nothing is lost" and that their children "are more alive than we are."

"When we defend the unborn, when we march for them, they're marching with us," Sandoval said.

She said that the first time she held a baby whose mother had chosen life after hearing her testimony, she was struck by the possibility that the baby boy might become a father with many descendants or a priest who saves many souls.

"It dawned on me that when one child is saved, the whole generation is saved," Sandoval said.

She encouraged the attendees to participate in 40 Days for Life, which she called "an atomic bomb against Satan." She asked them to imagine meeting God when they die and being asked what they had done for the unborn being killed in their generation. She invoked the words of the Confiteor, in which the faithful confess having sinned in "what I have failed to do."

After Sandoval's talk, the attendees had refreshments and an opportunity to buy her book "Transfigured" and have it signed by her.

Rita Russo, the coordinator of Boston's 40 Days for Life campaign, later said the reaction to Sandoval's talk was "overwhelming."

"Many people told me it was our best speaker ever, and we have had 15 since our first campaign in 2013," Russo said in a Feb. 25 email to The Pilot.

She went on to say that far more people had attended the event than expected. The attendees included a handful of high school students and a few men and women religious.

"I was delighted with the attendance. We had nearly twice as many as we had expected. God is truly blessing our efforts. I pray he will continue to do so," Russo said.

40 Days for Life is an international campaign to end abortion at local levels through prayer, fasting, community outreach, and peaceful prayer vigils outside abortion providers. There are two 40-day campaigns each year, one in spring that corresponds with Lent and another in the fall. According to the 40 Days for Life website, there will be vigils in five Massachusetts cities -- Attleboro, Beverly, Boston, Springfield, and Worcester -- during the spring 2020 campaign, which is to take place Feb. 26 through April 5.