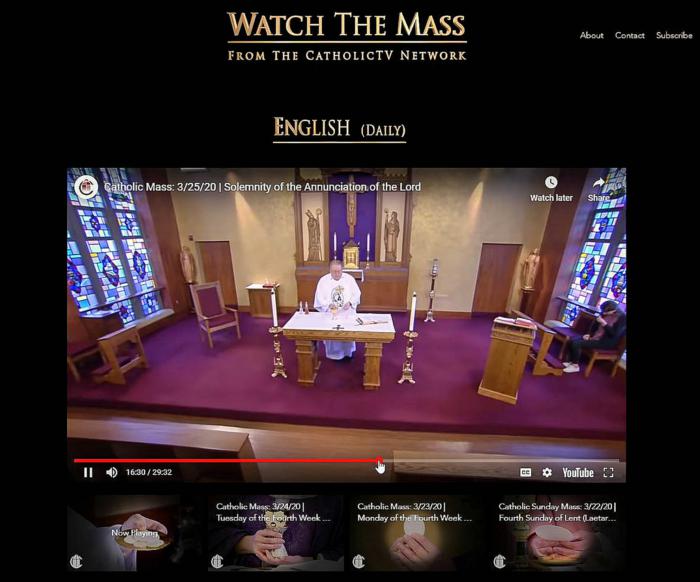 A screenshot of WatchTheMass.org from the CatholicTV Network. Pilot photo/courtesy CatholicTV

BRAINTREE -- Since the archdiocese announced on March 13 that all Masses were being suspended in order to prevent the spread of the COVID-19 virus, many parishes have turned to the Internet as a platform for sharing the Mass and staying connected with their communities in this time of "social distancing."

It was a new venture for Father Carlos Flor, the pastor of the Catholic Parishes of Jamaica Plain and Roxbury, which consist of St. Thomas Aquinas, Our Lady of Lourdes, and St. Mary of the Angels. Every day, Father Flor and parochial vicar Father Andrea Povero celebrate Mass in the chapel of their rectory. When they heard about other priests livestreaming their Masses, they decided to broadcast their daily Mass so their parishioners could see them and hear "a word of encouragement" each day.

"A word (of encouragement) coming from your own pastor is very beautiful," Father Flor said in a March 19 interview with The Pilot.

They held their first livestreamed Sunday Mass on March 15. They have been holding daily Mass in English at noon and in Spanish at 8 p.m. On Sunday, the livestreamed Spanish Mass had more than 1,000 viewers.

For the English Masses, Father Povero presides while Father Flor sings. They switch these roles for the Spanish Masses. They also hold a bilingual Divine Mercy Chaplet at three o'clock.

Father Flor said they have had "a good response" from parishioners, who are "very thankful" for the broadcast Masses.

"There are many possibilities for daily Mass on TV, but it's personal when you know the voice and you know the pastor," Father Flor said.

Broadcasting Mass is nothing new for Bishop Robert Reed, president and CEO of CatholicTV, "the parish of the airwaves." The television network's programming includes daily Mass, the Divine Office, morning and evening prayer, night prayer, the rosary three times a day, and a 3 p.m. Divine Mercy Chaplet.

Speaking to The Pilot on March 20, Bishop Reed noted that more parishes now have the technology necessary for recording and livestreaming the Mass, which used to be more costly and difficult for small parishes.

"It's so easy and it's relatively free once you invest in the equipment, that is to say, camera and Internet access," he said.

Bishop Reed said he thinks livestreaming is "a great thing for a parish to do," particularly during a crisis, such as this COVID-19 pandemic.

"I think people are longing to get back to church, to get back to Mass, and so this allows people a chance to at least have that experience during this time of isolation, to be connected with their community, their priests and their church that they love so much," he said.

Bishop Reed said that traffic on the CatholicTV website (www.catholictv.org) has increased by 800 percent, and the number of subscribers to the CatholicTV YouTube channel increases by hundreds each day.

In response to the pandemic and the suspension of Masses, CatholicTV set up a new website, www.WatchtheMass.com, to help the faithful find Masses that they can view online. Bishop Reed said this new website is getting "enormous traffic."

Our Lady of Good Voyage Seaport Shrine already had a "robust" social media presence, thanks to senior evangelization associate Andrew Skonieczny. This pre-existing foundation has helped the shrine's rector, Father Bryan Parrish, and chaplain, Father Paolo Cumin, reach out to their community, which is composed largely of young people who stop by the shrine during the workday. Fewer people walk through the Seaport now, Father Parrish noted in a March 23 interview with The Pilot.

Father Parrish said they considered livestreaming their Masses, but decided it would be best to instead direct people to CatholicTV.

However, the Seaport Shrine staff has been making good use of its social media platforms, which include Facebook, Twitter, and YouTube. They also have an "active" Flocknotes community, which allows them to easily share information and Internet links.

Father Parrish and Father Cumin have been taking turns recording videos in which they share daily spiritual reflections. Father Parrish has also recorded a Sunday homily for the past two weeks.

Using the video-conference software Zoom, Father Cumin has organized virtual recitations of the rosary on Wednesdays and Stations of the Cross on Fridays.

"I think enough have participated to realize that it's been something helpful to continue to offer," Father Parrish said.

"We know that it is effective and we're happy to do that for as long as we need to and look forward to the day when we can have some personal contact once again," Father Parrish said.