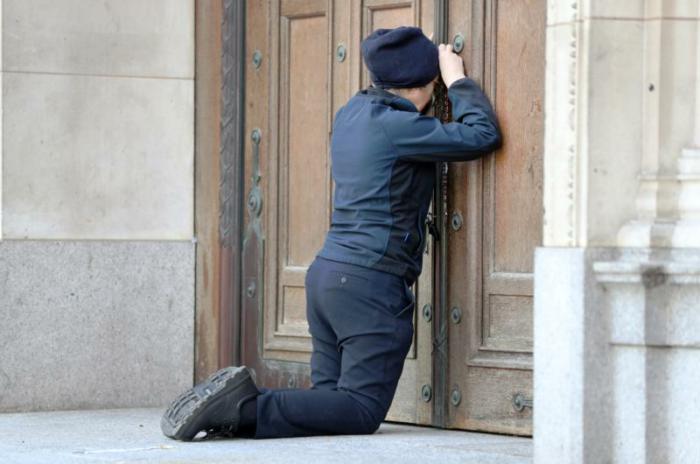 A woman prays at the closed doors of London's Westminster Cathedral in early April during the COVID-19 pandemic. During a recent online meeting, Msgr. Janusz Urbanczyk, the Holy See's representative to the Organization for Security and Cooperation in Europe, said anti-religious bias was evident during the lockdown. (CNS photo/Jonathan Brady, PA Images via Reuters)

VIENNA (CNS) -- As people spent more time online during the coronavirus lockdown, negative remarks and even the incitement of hatred based on national, cultural or religious identity increased, a Vatican representative said.

Discrimination on social media can lead to violence, the final step in a "slippery slope which starts with mockery and social intolerance," said Msgr. Janusz Urbanczyk, the Holy See's representative to the Organization for Security and Cooperation in Europe.

Msgr. Urbanczyk was one of more than 230 representatives of OSCE member nations, intergovernmental organizations, marginalized communities and civil society participating in an online meeting May 25-26 to discuss challenges and opportunities to strengthen tolerance during the pandemic and in the future.

Participants discussed the importance of inclusive policies and coalition building in strengthening diverse and multiethnic societies, as well as the need for early action to prevent intolerance from escalating into open conflict, said a statement from the OSCE.

According to Vatican News, Msgr. Urbanczyk told the meeting that hate crimes against Christians and members of other religions negatively impact their enjoyment of human rights and fundamental freedoms.

"These include threats, violent attacks, murders and profanation of churches and places of worship, cemeteries and other religious properties," he said.

Also of "great concern," he said, are attempts to profess a respect for religious freedom while also attempting to limit religious practice and religious expressions in public.

"The false idea that religions could have a negative impact or represent a threat to the well-being of our societies is growing," the monsignor said.

Some of the specific measures governments took to stem the spread of the COVID-19 pandemic involved "de facto discriminatory treatment" of religions and their members, he said.

"Rights and fundamental freedoms have been limited or derogated throughout the whole OSCE area," including in places where churches were ordered shut and where religious services faced greater restrictions than other areas of public life.