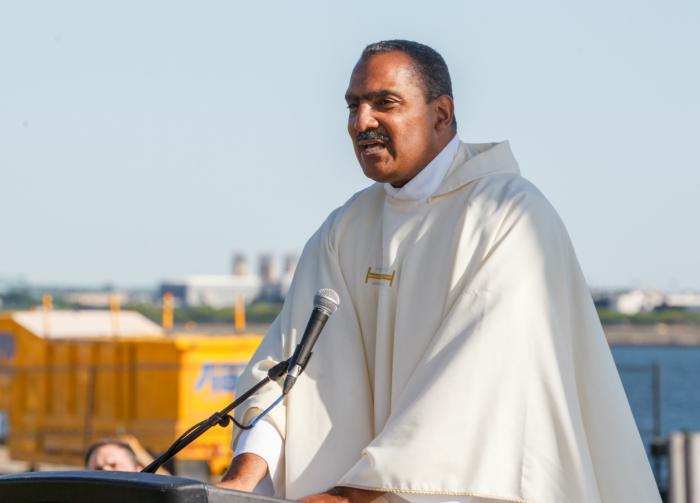 ROXBURY -- Conversations about racial injustice are nothing new at St. Katharine Drexel Parish, a black Catholic community whose members hail from the United States, the Caribbean, and various African countries.

Even before nationwide protests began in the wake of George Floyd's death in police custody, St. Katharine Drexel Parish's social justice committee had been discussing and raising awareness of systemic racism for years. In addition to running ministries within the parish, such as its food pantries and Advent giving tree, the committee regularly has a table at the archdiocese's Social Justice Convocation, and its members sometimes participate in panel discussions.

"We try to follow our baptismal call to be ministers for justice," said Sister Marie-Therèse "Tess" Browne, SCN, a co-chair of the parish's social justice committee, in a June 30 interview.

St. Katharine Drexel is part of the Greater Boston Interfaith Organization, which addresses such issues as affordable housing, police reform, criminal justice reform, and access to affordable to health care. Sister Tess said systemic racism can be seen in many of these areas.

"Systemic racism is underneath so much of this, how society has been set up, and who has status, who has a place at the table, (and) who helps to make decisions," Sister Tess said.

She said the COVID-19 pandemic has also revealed the existence of systemic inequalities and inequities.

"Black and brown people are bearing the brunt of what's happening, either because of their health care needs not being met before or the crowded conditions in which they have to live or lack of access to affordable health care," she said.

Conversations on racism shifted after May 25, the day Floyd, an African American man in Minneapolis, died in police custody after being arrested for allegedly using a counterfeit bill. A widely shared video recorded by a bystander shows a police officer kneeling on Floyd's neck for nearly nine minutes, even as Floyd said he could not breathe and passersby pleaded on his behalf. Floyd's death sparked weeks of protests against racism and police brutality across the United States.

Sister Tess said many people in her parish community feel that now is "time for action, time for some really deep, lasting change, that we're at a tipping point."

She said she finds the protests against racism "hopeful," and reflected on how they consist largely of young people.

She recalled the role that the youth played in social movements of the 1960s, fighting for civil rights and women's equality, among other issues. She noted that today's young people grew up after the Columbine High School shooting in 1999, the Sept. 11, 2001 terrorist attacks, and the Sandy Hook Elementary School shooting in 2012.

After the shooting at Marjory Stoneman Douglas High School in Parkland, Florida, in 2018, "the young people just realized that nobody was listening," Sister Tess said. That event sparked a youth-led movement against gun violence across the United States. Floyd's death acted as a similar catalyst for protests demanding change.

Sister Tess pointed to Ephesians 6:4, where St. Paul warns fathers not to anger their children. In some translations the verse reads, "do not provoke your children to riot."

Cardinal Sean O'Malley issued a statement on May 30 and a subsequent letter to the faithful on June 5, calling racism an "evil and moral cancer" and using the phrase "Black Lives Matter."

In the rest of the country, however, Catholic leaders' responses to Floyd's death and the subsequent protests have varied. Father Oscar Pratt, the administrator of St. Katharine Drexel Parish, said it would be good for the Church to have "a unified voice."

"Nobody's perfect, so no response is going to be perfect, but there has to be a response," he said.

Father Pratt noted that Church leaders in some places still have not spoken out, with some giving the excuse that their area does not have a large minority population, so racism is not their issue. That, Father Pratt said, is where problems come up.

He expressed appreciation for Bishop Mark Seitz's participation in a protest in El Paso, Texas, calling it "a powerful showing of solidarity." On June 1, Bishop Seitz and several priests knelt for eight minutes and 46 seconds, the amount of time Minneapolis police officer Derek Chauvin knelt on Floyd's neck. Pope Francis later called Bishop Seitz to thank him for representing the Church in this way.

Father Pratt said what is needed now is "not sympathy, because sympathy doesn't get us anywhere. It's empathy, it's knowing that you're not just killing him, you're killing us. It's a 'we' situation, not a 'them/us' situation."

Father Pratt and Cardinal O'Malley participated in a Mass for racial justice and healing on Castle Island on June 13. Leaders of several African American faith communities attended the outdoor event, which Father Pratt said was "edifying" and "beautiful."

Father Pratt stressed that fighting racism is a life issue. He said it is necessary to ask and be guided by the question, "What would Jesus do?"

Sister Tess said that while some people may perceive the phrase 'black lives matter' as being exclusive, in her view it is not.

When someone responds to the phrase "black lives matter" by saying "all lives matter," Father Pratt said, "that's true, but not all lives are not threatened."

Some Catholics have expressed concern that the Black Lives Matter organization does not align with Catholic teaching, as it has expressed support for abortion rights and LGBT lifestyles.

Sister Tess said she thinks people "may use that kind of approach as a way of continuing the status quo or to divide folks even further." She said to her it seems like "an attempt to obfuscate what is really happening."

"I think, many times, we work with people, and they may not have all the same opinions, but we can work together on some things we have agreement about," Sister Tess said.

When asked about the Black Lives Matter organization, Father Pratt said he does not care what people think of it.

Father Pratt said many people who participate in Black Lives Matter rallies may not know what the official group says, but they know what the expression means.

"The significance is not in the ideology of that particular organization, but it's in the truth of what it is the expression is saying," he said.

Sister Tess pointed to the example of two saints who, though white, are renowned for serving people of color. St. Katharine Drexel used her large inheritance to serve African Americans and Native Americans. St. Peter Claver, a Spanish Jesuit, ministered to slaves during the height of the slave trade.

Both of those saints were white people with privilege, Sister Tess said, "but their actions and their lives showed they believed that black lives matter."