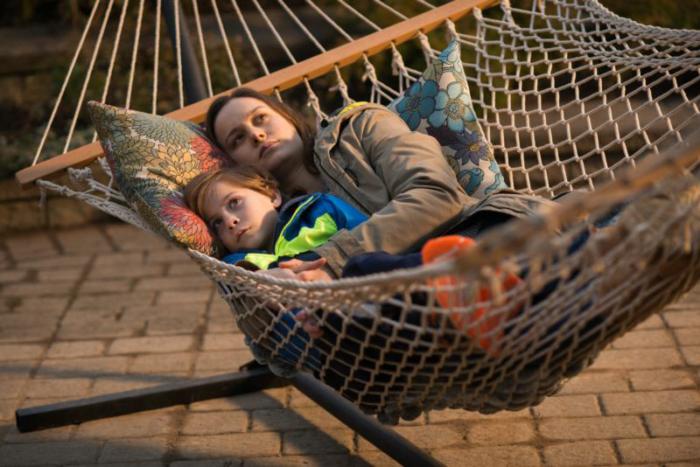 Jacob Tremblay and Brie Larson star in a scene from the movie "Room." The Catholic News Service classification is A-III -- adults. The Motion Picture Association of America rating is R -- restricted. Under 17 requires accompanying parent or adult guardian. (CNS photo/courtesy A24)

NEW YORK (CNS) -- The following are capsule reviews of theatrical movies on network and cable television the week of Aug. 9. Please note that televised versions may or may not be edited for language, nudity, violence and sexual situations.

Monday, Aug. 10, 5-7 p.m. EDT (Showtime) "Room" (2015). Poignant study of the love between a mother (Brie Larson) and her 5-year-old son (Jacob Tremblay), both of whom are held captive in a backyard shed by a sexual predator (Sean Bridgers) who kidnapped the young woman and fathered the boy. Born and raised within this confined space, the lad is confused by tales of the outside world but must rally his courage when an opportunity for escape presents itself. In adapting her own 2010 novel, screenwriter Emma Donoghue successfully renders everyday life as an alien environment for her bewildered protagonist, who also narrates, while subtly examining human adaptability, the power of imagination and the ironies underlying what appears on the surface to be an all-too-straightforward situation. Viewers of faith will particularly appreciate the biblical overtones of director Lenny Abrahamson's somber but ultimately hopeful parable, the moral impact of which may make it acceptable for some mature adolescents. Brief abusive violence, mature themes including serial rape and suicide, an overheard but unseen sexual encounter, a couple of profanities, several rough terms. The Catholic News Service classification of the theatrical version was A-III -- adults. The Motion Picture Association rating was R -- restricted. Under 17 requires accompanying parent or adult guardian.

Thursday, Aug. 13, 8-10 p.m. EDT (TCM) "Grand Hotel" (1932). Grandiose MGM star vehicle from Vicki Baum's novel about life-and-death events in a posh Berlin hotel whose guests include a depressed Russian ballerina (Greta Garbo), an aristocratic jewel thief (John Barrymore), a nasty Prussian industrialist (Wallace Beery), a pragmatic stenographer (Joan Crawford) and a dying bookkeeper (Lionel Barrymore). Directed by Edmund Goulding, the melodramatic proceedings are of less interest today than the cast's memorable performances in roles tailored to their screen personae, including Garbo's statement, "I want to be alone." Stylized violence including an off-camera murder, sexual situations and several attempts at larceny. The Catholic News Service classification of the theatrical version was A-III -- adults. Not rated by the Motion Picture Association.

Friday, Aug. 14, 10 p.m.-1 a.m. EDT (TCM) "The Great Escape" (1963). Thrilling rendition of a fact-based story about an elaborate escape of Allied prisoners from a German POW camp during World War II. Steve McQueen is the most ambitious of a crew that includes James Garner, Charles Bronson, James Coburn and Richard Attenborough as they plot a mass escape which becomes an intriguing, highly entertaining suspense gripper. With John Sturges directing, it all builds to a stunning, sobering climax that both tugs at the heart and keeps it racing. The Catholic News Service classification of the theatrical version was A-I -- general patronage. Not rated by the Motion Picture Association.