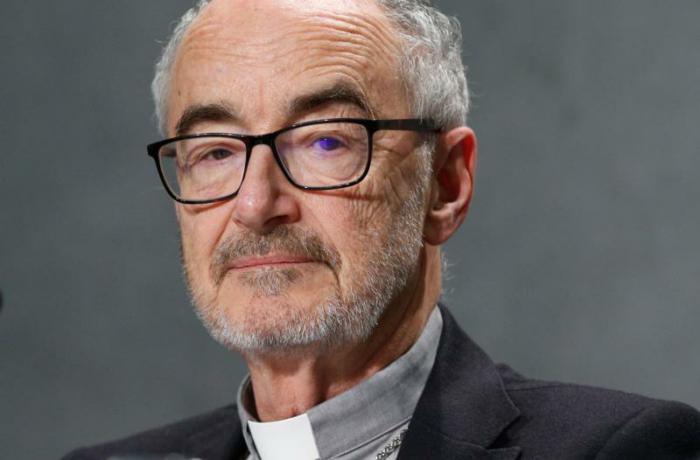 Cardinal Michael Czerny, undersecretary for migrants and refugees at the Vatican Dicastery for Promoting Integral Human Development, is pictured in a file photo. (CNS photo/Paul Haring)

The cardinal linked Mother Mechthild Thurmer, a Benedictine nun, with "a long tradition of Christians living their faith to the final consequence."

Asked how far people in the church should go and whether they should be willing to take that risk the German abbess is taking, which potentially could lead to a jail term, Cardinal Czerny responded, "God bless her!"

He added there was no reason for this Christian tradition to be "refuted or broken."

The cardinal was addressing a webinar. "Overcoming Indifference to Migrants and Refugees," organized by the international Catholic weekly, The Tablet, on World Day Against Trafficking in Persons July 30.

Mother Mechthild is facing trial in Bamberg, Germany, for offering refuge on 30 occasions to women seeking asylum at her monastery, the Abbey of Maria Frieden in the Bavarian town of Kirchschletten.

Up to now, proceedings against those offering church asylum have traditionally been dropped following the payment of a fine.

However, the 62-year-old abbess has refused to pay the fine and stands accused of two counts of "aiding and abetting illegal residents." But Mother Mechthild has defended her actions stating, "I acted out of Christian spirit; to give concrete help to a person in need can't be a crime."

A lawyer for Mother Mechthild, Franz Bethauser, expressed hope that the case would offer legal certainty over the position of religious organizations granting church asylum.