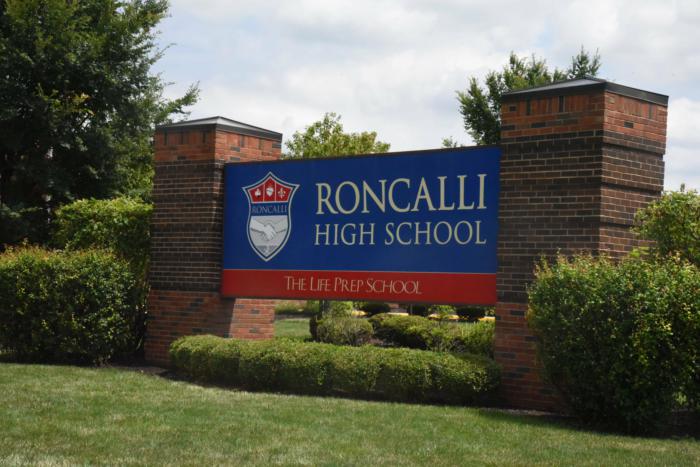 A sign for Roncalli High School in Indianapolis -- named for St. John XXIII -- is seen in this July 23, 2020, photo. Leaders of the school recently announced the institution's previous nickname, "Rebels," will be replaced with a new one more in keeping with its Catholic identity and mission. (CNS photo/Sean Gallagher, The Criterion)

INDIANAPOLIS (CNS) -- For its first 50 years, Roncalli High School in Indianapolis had the nickname "Rebels," but school officials announced this summer that they will replace this with a new name to better reflect the school's Catholic identity and mission.

School leaders announced the decision to forgo the original nickname in a video posted online July 22.

"This summer, I will appoint a special task force to explore alternative names and symbols which will better reflect our Catholic mission and honor the legacy of our patron -- Angelo Roncalli," said Roncalli interim president Father Robert Robeson.

Members of the task force will include current students, faculty, staff, alumni and board members.

Roncalli was the family name of St. John XXIII, who was pope from 1958 until his death in 1963. It was chosen as the name for the high school, founded in 1969 through the merger of the former Chartrand and Kennedy Memorial high schools.

"Rebel" was chosen as its nickname in part as a reflection of the "revolutionary spirit of Angelo Roncalli," said Father Robeson in the video, because he convened the Second Vatican Council in 1962, which brought about many changes in the life of the church.

"As we have learned more about St. John XXIII, it is clear that characterizing him as a rebel, in many ways, misses the mark," said Charles Weisenbach, Roncalli's principal, in the video. "In fact, he was a visionary leader. He was a saint who was deeply rooted in his love for Jesus Christ, his devotion to the Catholic faith and his respect for the dignity of all people. These qualities are what formed him into the great saint that we venerate today."

Terese Carson, Roncalli's vice president for institutional advancement, also spoke in the video about other reasons for forgoing the previous nickname and seeking a new one.

"The confusion and negative connotations attached to the nickname 'Rebels' are also a source of concern as we move forward over the next 50 years," she said. "We have had alumni and community members express concerns about how this nickname can be misunderstood, particularly as it relates to our deep commitment to honoring the dignity of every person -- as Christ calls us to do."

In an interview with The Criterion, newspaper of the Archdiocese of Indianapolis, Father Robeson said there is not a set time frame for the task force to develop an alternative nickname, but he expects an announcement of a new one sometime during the spring semester of the 2020-21 academic year.

Whatever the new nickname is, Father Robeson said it will have ties to the Catholic faith.

"We're realizing that there are better options for conveying our Catholic identity and mission," said the priest who also serves as pastor of Holy Name of Jesus Parish in Beech Grove and administrator of Good Shepherd Parish in Indianapolis. "Whatever name that we choose will have some kind of Catholic symbolism."

While acknowledging that some in the Roncalli community may be disappointed by the change, Father Robeson expressed hope that recognizing the importance of the school's mission will help them to accept and even be excited about possible alternatives.

"Changing the nickname will not change the incredibly good work that Roncalli does in forming and educating young people," he said. "Roncalli is much bigger than its nickname."

Several public schools across the country in recent months also have looked at their "Rebel "mascots and nicknames and considered how the name might be offensive because many associate it with the Southern Confederacy during the Civil War.

This summer, amid the nation's examination of racism, schools, sports teams and brands have all taken a closer look at their names and how they might be perceived.

A group of alumni from Columbus Catholic High School in Marshfield, Wisconsin, started a petition in June urging school leaders to change the school's name and remove the statue of Christopher Columbus from the front of the school. The petition, with 856 signatures in early August said the "deeply racist ways" of Christopher Columbus are not consistent with Catholic values and the celebration of him delegitimizes the experiences of Black and indigenous peoples.

The school's president, David Eaton, publicly announced that there would be no school name change and said in a letter to the school community that the name was chosen to pay tribute to the local chapter of the Knights of Columbus who helped the school financially to get started.

"This isn't a statue standing alone in the middle of a square somewhere. For many of our alumni and staff, Columbus -- the school -- is a lived experience. Changing the name takes from them part of their own, personal history. We have kept the name throughout the years to honor the Knights and to honor those who have spent their lives supporting the school they love," he wrote.

Contributing to this report was Carol Zimmermann.

Gallagher is a reporter at The Criterion, newspaper of the Archdiocese of Indianapolis.