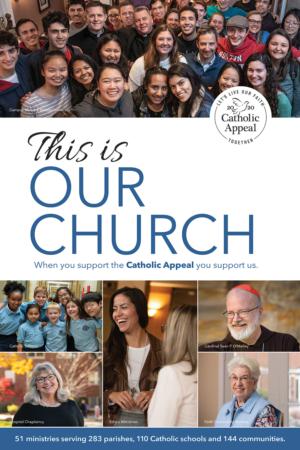 BRAINTREE -- After being postponed for several months due to the closing of churches to prevent the spread of the coronavirus, the Catholic Appeal will launch its in-pew campaign on the weekend of Aug. 22-23, in the hope of ending the campaign by summer's end.

Arlene Dubrowski, the archdiocese's Catholic Appeal manager, and Patricia Bartram, interim secretary for institutional advancement, spoke with The Pilot about the appeal's progress during this unusual year.

The Catholic Appeal supports the archdiocese's Central Ministries, Catholic schools, and parishes, as well as programs and resources available to anyone in a community. The in-pew campaign, which gives churchgoers the opportunity to make contributions at Mass, usually makes up 25 to 30 percent of the overall appeal. The remainder comes from direct mail, online giving, and major gifts.

The 2020 Catholic Appeal was announced in parishes during the weekend of March 7-8. Commitment Weekend, when designated envelopes are left in the pews for churchgoers who wish to make donations, was originally planned for the following weekend, March 14-15. However, the suspension of public Masses beginning March 13 prevented this crucial step in the campaign.

After that, Dubrowski said, the archdiocese shifted its attention to helping parishes, which suffered financially due to the lack of a weekly offertory.

"Now that the parishes are slowly reopening, we had to take another look at the Catholic Appeal and to relaunch it so we can close our campaign hopefully before the end of the summer," Dubrowski said, speaking to The Pilot on July 17.

Unlike other years, the in-pew campaign this year will use a multilayered approach to reach parishioners who, while unable to attend Mass, may still be watching the Mass online and following their parish's activities through emails and social media updates.

Dubrowski said their overall goal has not changed.

"What we're trying to do is close out the appeal in pretty much the only way we can -- reaching out to parishioners where they are," she said.

Dubrowski said that although the ministries supported by the appeal have had to change the ways they operate during the pandemic, they are still present, and "still working as hard as ever, maybe even harder these days."

"It's really important to make sure that they have the resources they need to continue their work, and that's why the Catholic Appeal is so important," she said.

For example, she said, the appeal supports campus ministries, which continued to serve college students after the onset of the pandemic. Even when students were sent home for the remainder of the spring semester, campus ministries kept them connected with their schools and with a Catholic community at a time when many were worried and uncertain about the future.

More information about the Catholic Appeal can be found at BostonCatholicAppeal.org.