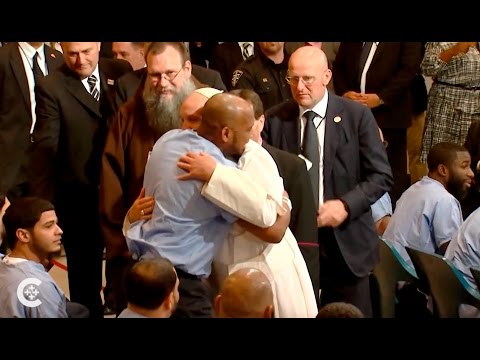 WASHINGTON (CNS) -- Although the thought of standing with throngs of people for hours at a time seems foreign now in the midst of the coronavirus pandemic, it was something tens of thousands of Catholics were happy to do in Washington, New York and Philadelphia when Pope Francis made his visit to the United States five years ago.

The Sept. 22-27, 2015, visit was so full, "each day was like a week," Archbishop Joseph E. Kurtz of Louisville, Kentucky, president of the U.S. Conference of Catholic Bishops at that time, said a few months after the whirlwind trip that included Masses, addresses to dignitaries, church leaders and massive crowds and also meetings with smaller groups of prisoners and the homeless.

Archbishop Kurtz said any one of the pope's public events would have made the trip worthwhile, but he was particularly moved by the pontiff's "personal opportunities to be with people that are not the influential, but the forgotten."

The archbishop told Catholic News Service that the pope's presence in the United States brought Catholics together with a "sense of fervor and enthusiasm" and he was convinced the ripple effects of that gathering would continue to benefit not just the church in the U.S. but the pope too.

On his return flight to Rome, Pope Francis told reporters he "was surprised by the warmth of the people" in the U.S. and how they were "so loving."

This love was on full display in crowds that lined streets, and waited in long security lines, in all three cities just to catch a glimpse of the pontiff. And he returned the love right back, waving from the popemobile or the black Fiat and personally greeting bishops, schoolchildren, prisoners, the homeless and abuse victims or in celebrating liturgies and addressing massive crowds or congressional leaders and U.N. officials.

This was his first visit to the United States, and he introduced himself as a brother, a son of immigrants and a neighbor. He reminded the country's leaders of the nation's founding principles and urged them to protect families and the earth from an uncertain future.

Some facts from the five days:

-- It was covered by 8,000 credentialed reporters.

-- 25,000 people attended the canonization Mass for St. Junipero Serra at the Basilica of National Shrine of the Immaculate Conception in Washington Sept. 23.

The theme of the visit was "Love Is Our Mission," and at each U.S. stop the pope stressed the importance of reinvigorating one's faith, serving others and living up to the founding ideals of the United States.

He met privately with U.S. bishops and said he had not come to judge or lecture but to encourage them. He urged the bishops to promote the "culture of encounter," which he has often spoken of and to dialogue with one another, with members of the laity, with families and society, adding: "I cannot ever tire of encouraging you to dialogue fearlessly."

The pope was welcomed to the White House and became the first pope to address a joint meeting of Congress, which in today's divided political environment also seems hard to imagine. Inside the U.S. Capitol, he also touched on hot-button issues such as immigration, the death penalty and care for the environment.

Pope Francis spoke strongly about the need to care for immigrants and not fear them, stressing that most Americans descended from immigrants. He addressed the need to protect and defend all human life, giving particular emphasis to his desire for the "abolition of the death penalty" and he urged Congress to take courageous action to stop harming the environment.

Right after this speech, the pope visited with Washington's homeless at a lunch coordinated by Catholic Charities of the Archdiocese of Washington. Similarly, when he was in Philadelphia, he visited a prison, spending an hour with prisoners and saying he was visiting as a pastor "but mostly as a brother."

In New York, Pope Francis greeted big crowds, but he also joined leaders of other religions in honoring the dead and comforting their surviving family members at ground zero in New York. He also addressed the United Nations, urging leaders to work for peace, environmental justice and the needs of the poor.

In Philadelphia, using a lectern once used by Abraham Lincoln, he called people to respect religious freedom and ethnic and cultural differences. He ended his visit by urging Catholics to continue their enthusiasm in the faith, welcoming newcomers and caring for creation.

The pope always stressed the purpose of the U.S. visit, on the heels of a visit to Cuba, was to attend the World Meeting of Families, which took place in Philadelphia on the closing days of his trip. While he was at this gathering, he emphasized the importance of grace-filled moments of family life.

His parting words of advice for U.S. Catholics, delivered at the Philadelphia International Airport, was a message of encouragement that still holds up five years later. "Do not let your enthusiasm for Jesus, his church, our families and the broader family of society run dry," he said.