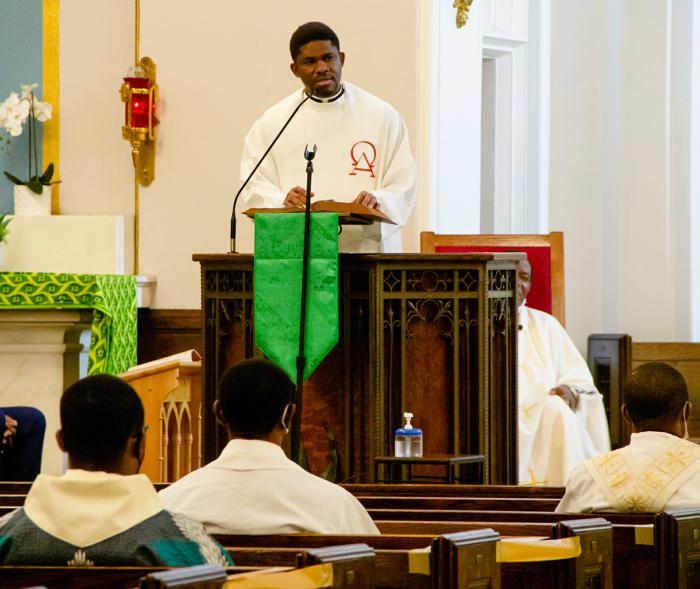 DORCHESTER -- Members of the Nigerian Catholic Community of St. Katharine Drexel Parish held a Mass on Oct. 23 to pray for peace and justice while expressing solidarity with protesters calling for an end to police brutality in Nigeria.

Protests in Nigeria began in early October as youth called for an end to bad governance and the disbandment of the Special Anti-Robbery Squad (SARS), an arm of the Nigerian Police Force. SARS has been accused of human rights violations, including theft, rape, torture, murder, and extrajudicial killings.

On Oct. 20, police fired on protesters at the Lekki toll gate in the Nigerian state of Lagos, killing at least 12 people. This incident drew international condemnation.

In response to the protests, SARS was replaced with a new Special Weapons and Tactics team. The Lagos state government has also established an eight-person judicial panel, including two youth members, to investigate the Oct. 20 shooting as well as the activities of SARS.

Several Nigerian priests attended the Oct. 23 Mass at St. Katharine Drexel Church, some of them students at nearby universities or chaplains in local hospitals.

The homilist was Father Henry Nwanguma, who began by singing a verse from the song "The Solid Rock," expressing hope in Christ.

"Today we want to commiserate with those who have lost their loved ones while protesting and asking for justice and freedom in their homeland," he said.

Father Nwanguma said it is "high time" for Nigeria to receive outside intervention.

He said that although their hope is in God, as the song said, God uses human instruments and gives humanity the power to act.

Father Andrew Nkwocha, chaplain of the Nigerian Catholic Community, spoke to The Pilot after the Mass.

"The Mass we celebrated today is to add our voices to what is happening in Nigeria. It (is) a cause for concern for anybody who fights for justice, who wants justice and peace," he said.

Father Nkwocha said that the people of Nigeria should have the freedom to "make their grievances known."

The Catholic bishops of Nigeria have criticized the use of violence by the police and expressed support for reform, seeing the protests as a symptom of larger problems, according to Catholic News Service.

On Oct. 25, while addressing visitors to St. Peter's Square, Pope Francis said he was praying for the people of Nigeria. The Catholic News Agency reported that the Holy Father said he was following "with particular concern the news coming from Nigeria about the recent violent clashes between law enforcement agencies and some young protesters."

"We pray to the Lord that all forms of violence will always be avoided, in the constant search for social harmony through the promotion of justice and the common good," Pope Francis said.