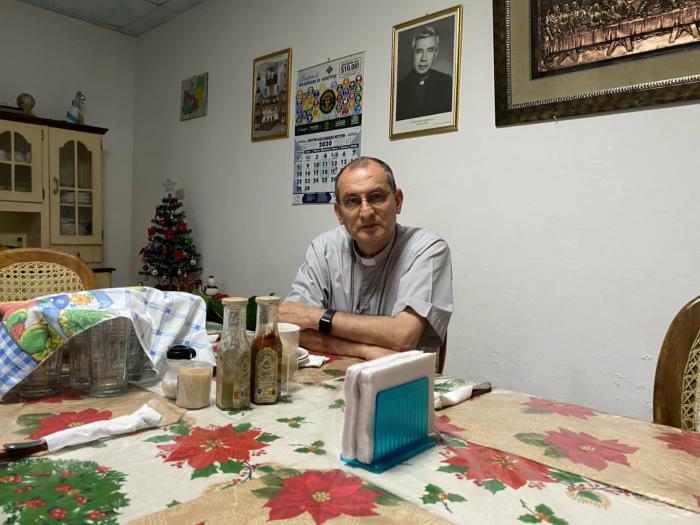 ...Bishop William Iraheta of Santiago de Maria, El Salvador, speaks in Chalatenango Nov. 26, 2020, about Father Ricardo Antonio Cortez Martínez, rector of the seminary in his diocese, who was killed execution style in August. The U.S. Conference of Catholic Bishops' Subcommittee for the Church in Latin America approved a $60,000 grant request for the St. Oscar Arnulfo Romero seminary in November. Father Cortez wrote the request weeks before his assassination. (CNS photo/Rhina Guidos)

CHALATENANGO, El Salvador (CNS) -- Among the projects approved during an early November meeting of U.S. bishops was aid to a seminary in El Salvador whose rector was killed execution style in August on the side of a road as he headed to his home diocese to celebrate Mass.

The U.S. Conference of Catholic Bishops' Subcommittee on the Church in Latin America approved a $60,000 request for funding for the St. Óscar Arnulfo Romero seminary from a grant request written by its rector, Father Ricardo Antonio Cortez Martínez, whose body was dragged into a grassy area after he was fatally shot Aug. 6.

No one has been arrested for the crime.

"The seminary was one of his great loves," Bishop William Iraheta of the Diocese of Santiago de Maria in eastern El Salvador told Catholic News Service in a Nov. 26 interview in Chalatenango.

Father Cortez, however, was a priest of the Diocese of Zacatecoluca and often traveled to celebrate Mass or attend other religious events there when time away from the seminary allowed.

Bishop Iraheta said the priest's concern was to level the playing field so that young men, even those who came from families of few means, could study to become priests, even if they and their families couldn't afford it.

"Each generation comes with its challenges and here in this country, the academic base (for seminarians) isn't always the same," Bishop Iraheta said.

"That's what we're faced with, so we have to subsidize some of the young men" during formation and discernment, and Father Cortez's concern was that the poor not be excluded from that process, he added.

In June, less than two months before his death, he wrote to request funds from the U.S. church's Collection for the Church in Latin America. For more than 50 years, the collection has funded pastoral programs, seminarian and religious formation, and youth and family ministries as a sign of solidarity between Catholics of the United States and those in Latin America.

"The church in Latin America grant to fund the Seminary San Óscar Arnulfo Romero in El Salvador is an exceptional one because the rector, Father Ricardo, had sent the paperwork just before he was murdered," said Oblate Father Leo Perez, director of the Latin America collection. "It arrived after his death, as if he was speaking to us from his place in heaven."

Bishop Iraheta said the funds represent "fraternity" and will be invaluable in following the vision of Father Cortez.

He told CNS it represents the closeness and invaluable support of the church in the United States and is another "signal of fraternal love" from the USCCB, particularly because they made a point of sending an extra $10,000 to support a project dear to the Father Cortez.

"I have no words to express the gratitude," said Bishop Iraheta. "Particularly from people whose faces we don't know. We have found, personally, love, and feel the fraternity, and that means a lot to us."

He said he was convinced that Father Cortez's life of service continued, even after death, because his work on behalf of the seminarians, led to the approval of the grant.

"As Christians we are part of the great river of life," he said. "I know he continues in a new life, supporting and praying so that the work continues."

Father Perez said that the seminary, which bears the name of the first Salvadoran saint, one in a long list of Catholics killed during a civil conflict in El Salvador in the 1980s and early 1990s, is worthy of the projects the collection funds.

"Along with all the other martyrs of his country, we count on their intercession for the success of the Latin American projects we sponsor," Father Perez said.