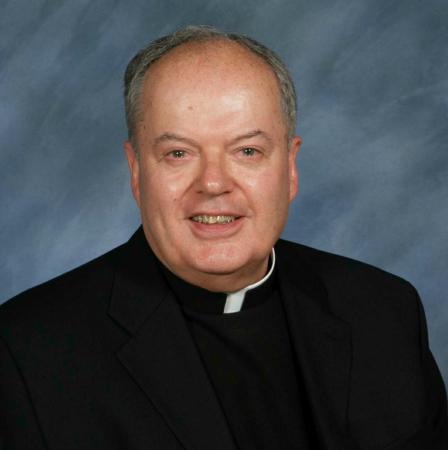 "I was speaking to him at 4:30 p.m. He was chipper and planning to be back at Regina Cleri in a few days. He was dead at 6:00 p.m." These are the shocked words of Msgr. Peter V. Conley, classmate and friend of Msgr. Dennis F. Sheehan, who died unexpectedly on Nov. 20, 2020 in Newton.

Born Sept. 30, 1938, in Beverly, he was the only child of the late Dennis and Mary (Quinn) Sheehan. His mother, Mary, died when Dennis was just six years old. His father had previously been married to Eleanor (Connolly) Sheehan, who died in 1935 and was the mother of Mary; Arthur; Eleanor (Sheehan) Pierce; Gregory; and William. He then married Cecilia (Henry), who, with Dennis's father raised the children. In his very early years, the family lived in Beverly Farms before moving to Marblehead. He attended elementary school at Immaculate Conception School, Salem, and then traveled south to neighboring Lynn for high school at St. Mary Boys' High. He told The Pilot that, among his early mentors and examples of priestly life, was the late Msgr. John Dillon Day, then-assistant at St. Mary Parish, Lynn.

Following his high school graduation in 1956, he entered archdiocesan seminaries, first at Cardinal O'Connell in Jamaica Plain and later at St. Clement Hall in Brighton. There, he met young Peter Conley from Readville, and the two developed a friendship that endured through seminary years -- and their 57 years of priestly ministry. He was sent to Rome to study at the Pontifical Gregorian University and was a member of the class of 1964 at the Pontifical North American College. An outstanding student, he completed his seminary formation in Rome in 1964; then it was custom for December ordinations, and so he was ordained at the Church of Sacro Cuore Cristo Re, a large church in the rapidly expanding Roman suburbs. One of Rome's auxiliary bishops, Filippo Pocci, ordained him and his classmates on Dec. 18, 1963.

On his return to the archdiocese in July 1964, he was assigned as an assistant at Sacred Heart, East Boston, with fellow Roman and legendary pastor Msgr. Lawrence Basil Killian. Ever the storyteller, Dennis had a verbal volume of tales from the thriving parish, but especially about its pastor. In 1968, he served briefly as an assistant at St. Patrick, Watertown, before a nine-month appointment as an associate at St. Michael, Avon. During these assignments, he was also teaching at both Emmanuel and Regis Colleges.

In 1969, he returned to Rome and his alma mater, where, for the next 11 years, he would be involved in both initial and ongoing formation of priests: seminary and continuing education.

His initial assignment was as director of liturgy "on the Hill," the seminary house of formation. Not only was he responsible for the liturgical life of the seminary but also for forming seminarians in participation and preparation for the celebration of the various liturgical rites, as they were then being released and translated following the directions of the Second Vatican Council.

When a program for ongoing formation of priests was initiated, he was named its first director and, in the years following, hundreds of priests attended The Institute for Continuing Theological Education (ICTE). The program covered various theological topics and ICTE students had some of the best and most notable teachers, then-residents in the various Roman universities, and some who were flown in from the United States for week-long sessions of renewal.

For several years, there was a "compacted" version of the ICTE program for US bishops; the month-long program, usually in September, brought bishops from across the country to Rome for their own "ongoing formation." At this time, the ICTE program was at the graduate house, the "old college," the Casa Santa Maria. Dennis lived there and was able to complete his doctoral studies at the nearby Gregorian University -- "the Greg," two blocks away from the Casa.

Gregarious, quick-witted, always smiling, he loved Rome and loved showing off the city. Perhaps picking up where he left off in the seminary, he knew the city. One (of many) stories about one of his favorite haunts "Vecchia Roma": a group of priests was there and the waiter heard that they were from Boston, "Ah, you must know 'Monsignore Sheehan.'" Once that was confirmed, the manager appeared and spoke about his affection for Dennis and how pleased the family was that Dennis was still a regular -- by this time, he had already returned to the archdiocese and Pope St. John XXIII Seminary, first as a faculty member and then as rector.

Recognizing the great service this unique seminary provides, not only for the archdiocese but also for the rest of the local churches in the United States and beyond, he began an aggressive and effective development program to secure a sound fiscal basis for the support and growth of the seminary. He put the seminary "on the map" in ways that had not until then been done.

In July 1986, he was named rector of the Pontifical College Josephinum in Worthington, Ohio. This seminary had served for years as a kind of "vocational clearinghouse." The students could enroll initially without attachment to a specific diocese, and then bishops or vocation directors could visit and market their dioceses to the students; the student body was composed of students "from everywhere," and students who would eventually serve "everywhere." Just prior to this appointment, Pope St. John Paul II had named Dennis a member of the papal household as a prelate of honor with the title of Rev. Msgr.

After three years at the Josephinum, he returned to Boston and was appointed director of the Office for Worship of the archdiocese. The office had its headquarters in familiar territory: Pope John Seminary. During his tenure in the Worship Office, he resided first at Our Lady Help of Christians Rectory, Newton (1989-1991); then moved to neighboring St. John the Evangelist Parish, Newton, where he was the administrator until 1996.

At Our Lady's, Father Richard "Doc" Conway was pastor; Father Joseph Curran was parochial vicar as was your scribe. Three Roman classmates: Dennis, then-Father Peter Conley, and then-Father Richard Liddy of Newark, who was studying at Boston College, all lived on the third floor. At Newton, all were treated to Dennis's additional talent -- excellent cooking. Doc said "that was a good house and those were great years" -- mostly because of the great fraternity created in the rectory, in no small part because of Doc himself. A particular delight for Dennis was a bit of Italy in Newton, highlighted every July by the annual festival of Our Lady of Mount Carmel; with its procession through the streets of Nonantum and invites to stop for refreshment along the trek, which, though not extensive, was usually accompanied by humid July weather.

In 1995, Dennis took a six-month sabbatical in Berkeley, Calif.

He returned to the archdiocese in 1996, briefly serving as administrator of St. Lawrence Parish, Brookline, and then being named magisterial chaplain of the area Knights of Malta.

Bernard Cardinal Law named him pastor of St. Paul Parish in Cambridge and senior chaplain at the Harvard-Radcliffe Catholic Center. He served as pastor of the parish and its attached St. Paul Archdiocesan Choir School, as well as senior chaplain at the Campus Ministry for Harvard, and director of the Catholic Center. During this time, he also served for a term as a vicar forane of Vicariate IV of the Central Region (2002-2004).

He returned to Newton in 2007, this time as parochial vicar at Our Lady Help of Christians Parish; in 2009, he was named co-director of the Office of Worship and Spiritual Life, with emphasis on the Office for Worship. When Sacred Heart, Newton, joined Our Lady Help of Christians in a collaborative, he was appointed parochial vicar of both parishes in 2013.

In addition to his parish duties, he was during this time a member and moderator of the Presbyteral Council for the archdiocese, a member of the Clergy Personnel Board, and also a kind of adjunct to the Office for Divine Worship. Msgr. Conley noted in his funeral homily that Dennis was by training a liturgist, but never a "liturgical terrorist."

On Sept. 1, 2015 -- just a few weeks shy of his 77th birthday -- he was granted senior priest retirement status but remained in residence at Newton.

He had been experiencing some health problems but nothing that seemed life-threatening. However, he contracted COVID-19 and was hospitalized and then placed at a rehab center in Newton, where he died on Nov. 20, 2020.

His Funeral Mass was celebrated on Nov. 27 at Our Lady Help of Christians, Newton. Cardinal O'Malley was the principal celebrant and Msgr. Peter Conley, as already noted, the homilist. Concelebrating were Retried Rockville Centre Bishop William F. Murphy, a friend of both Dennis and Msgr. Conley since their seminary days in Boston and in Rome; Boston Auxiliary Bishop Emeritus Arthur Kennedy; and current Auxiliary Bishops Peter Uglietto and Mark O'Connell. Father Daniel Riley, current pastor of the parish, also concelebrated. Because of current restrictions and, at the family's request, the assembly was small; there were just two dozen people seated throughout a church that seats more than 800 in ordinary times.