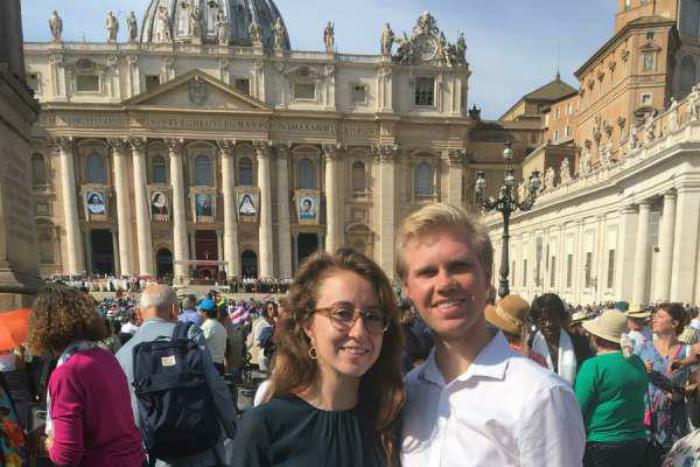 Prince praises St. Newman; others promote him as 'doctor of the church'

Vatican City, Oct 13, 2019 CNA.- The canonization of St. John Henry Newman Sunday drew “Newman converts” to Rome from throughout the English-speaking world, all of whom followed Newman’s writings across the Tiber River and into the Catholic Church.

Elayne Allen, 24, is one such “Newman convert.” She came into the Catholic Church in December 2017. Allen decided to become a Catholic after a friend loaned her a copy of Newman’s “An Essay on the Development of Doctrine.”

Allen traveled to Europe for the first time so that she could be present at Newman’s canonization Oct. 13.

“It was ... deeply personal and gratifying to see someone who’s impacted my thinking and prayer life so much become a saint. The grace God has given me through this saint made me think of the beautifully intricate and various ways God chooses to reveal himself to us,” Allen told CNA after the canonization Mass.

Newman was canonized by Pope Francis along with Mariam Thresia, Marguerite Bays, Giuseppina Vannini, and Dulce Lopes, during a Mass in St. Peter’s Square, with an estimated 50,000 people in attendance.

“The Church’s universal mission kept returning to my mind. I thought it a splendid image of the Church’s catholicity that Mother Vannini, who grew up as an Italian orphan, and John Henry Newman, widely considered among the Church’s greatest theologians since Thomas Aquinas, honored side by side,” she said.

Allen, who had been had been raised attending non-denominational evangelical churches, was introduced to the writings of Newman as a student at Baylor University during a class on 18th and 19th century literature.

“I had never even heard of Newman … the existence of a formidable Catholic intellectual tradition was completely alien to me,” she said.

“I quickly found Newman to be a demanding but electrifying writer. He is known for sentences that occupy an entire page, piling one qualifying or descriptive clause after another. His lucid, crisp but recondite prose utterly absorbed me.”

Allen credits Baylor’s Great Texts program for providing her with an introduction to Catholicism and Church history. By the time she reached graduation, she was reading early Church history on her own with an eye on both Orthodoxy and Catholicism.

“My reading pointed to Rome or Constantinople. It seemed evident that the Church is an institutional body protected the Holy Spirit to safeguard doctrine, but I wasn't certain which communion was most consistent with Scripture and early ecumenical councils,” she said.

That is when a friend gave her a copy of “An Essay on the Development of Doctrine.”

Allen said she was “elated by the...simplicity and vigor” in “Newman’s groundbreaking explanation of the way ideas crystallize over time through contact with various circumstances, contexts, and even errors.”

“He says the ‘deposit of faith,’ the earliest revelations of Christianity, imply a variety of interconnected doctrines that require time and contact with living reality to be realized. Newman crucially argues that, while the power of human reason can detect and discern these developments, Christ promises the Holy Spirit as the ultimate protector against error,” she explained.

“I soon became convinced that the Catholic Church, even with all its excesses and eccentricities, is the only communion where doctrine actually develops and knew that I wanted to become Catholic,” Allen said.

She was received into the Catholic Church on Dec. 6, 2017. She continues to ask regularly for Newman’s intercessions and has “not been able to stop reading his work.”

“I read ‘The Grammar of Assent’ earlier this year, a challenging but rewarding book. His ‘Apologia Pro Vita Sua’ revealed to me his spiritual sensitivity and the turmoil he faced before and after his conversion,” she said.

As a recent convert, Allen says she has also enjoyed discovering the beauty of the Church in Rome for the first time this weekend.

“It’s positively overwhelming and enchanting to be here. It’s made me realize the ways in which God chooses to use human artifice and genius to demonstrate His glory. Breathtaking artwork and written works crafted by men and women to glorify Him are ever-displayed throughout Rome,” she said. “It has been a treasure to behold!”