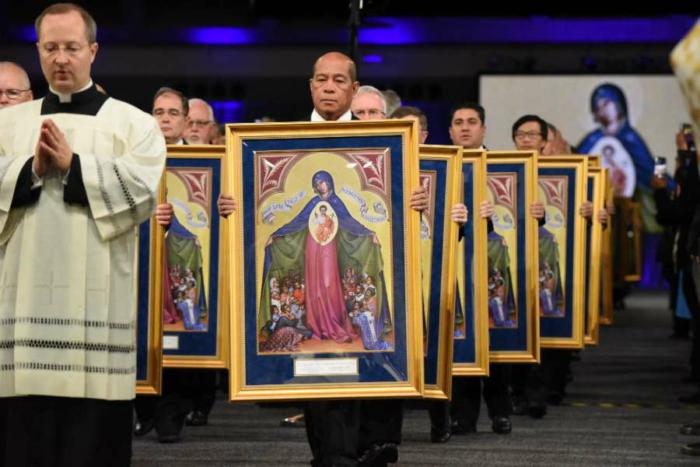 Baltimore, Md., Aug 8, 2018 CNA.- The Archbishop of New York encouraged Catholics to imitate the patient and persistent prayer of St. Dominic, during a homily Aug. 8 at the 2018 Knights of Columbus convention in Baltimore.

“Jesus prefers patient, persistent, persevering, pestering prayer! St. Dominic claims this creates within us a readiness, a space, to receive God’s answer. We would say such constant prayer exercises our ‘faith muscle,’ which tends to get flabby,” said Cardinal Timothy Dolan of New York.

The cardinal pointed to St. Dominic’s dedication to the rosary and contemplation of the Gospels as daily practices worthy of imitation, comparing St. Dominic’s perseverance with that of the Canaanite woman in the Gospel.

Dolan also commended the amount of prayer that takes place at the Knights of Columbus’ annual convention, which includes daily Masses, a Eucharistic adoration chapel, and invocations before every event.

Aug. 8 is celebrated in the Church as the memorial of St. Dominic, the 13th century founder of the Order of Preachers, known as the Dominicans, who spread devotion to the rosary.

“This towering saint gives us an abundance of attributes to celebrate: his preaching, so renowned that his spiritual sons are called ‘the order of preachers’; his intellect, the spring that gave us scholarly giants such as St. Albert and St. Thomas Aquinas; his zeal, as St. Dominic was non-stop in his teaching, preaching, travel, and work, all for Jesus and His Church,” said Dolan.

However, he reminded the Knights that prayer was “what generated the renowned preaching, scholarship, and evangelical energy of St. Dominic.”

After the Mass, the Greek Melkite Archbishop of Aleppo, Syria, Jean-Clement Jeanbart spoke briefly about a pilgrim icon of Our Lady Help of Persecuted Christians, which was then blessed by Archbishop William Lori of Baltimore.

Lori’s blessing was the kickoff to the Knights’ Marian icon prayer program. The archbishop invoked St. Paul’s words, “though we are afflicted in every way, we are not crushed; though perplexed, not driven to despair; though persecuted, not forsaken; though struck down, not destroyed.”