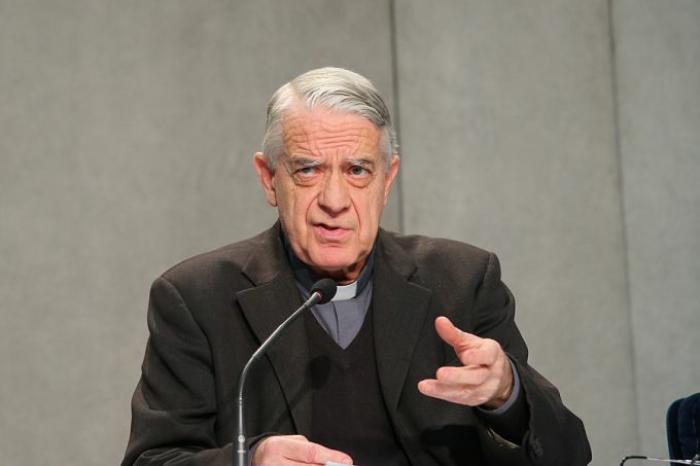 Vatican City, Jul 11, 2016 CNA/EWTN News.- The outgoing Holy See press officer has clarified that there are no directives forthcoming from the Vatican directing that priests face in the same direction as the faithful while saying Mass.

Fr. Federico Lombardi's July 11 communique follows on the appeal by Cardinal Robert Sarah, prefect of the Congregation for Divine Worship, asking priests to “implement this practice wherever possible, with prudence and with the necessary catechesis, certainly, but also with a pastor’s confidence that this is something good for the Church, something good for our people.”

Cardinal Sarah's suggestion was made last week at a conference on liturgy being held in London.

“Cardinal Sarah has always been concerned, rightly, about the dignity of the celebration of Mass, in a way that adequately expresses an attitude of respect and adoration for the Eucharistic mystery,” Fr. Lombardi's statement said.

He added that some of the cardinal's words were “misinterpreted, as if he were announcing new indications differing from the liturgical norms given until now, and the words of the Pope on the celebration towards the people and on the ordinary rite of Mass.”

Whatever such misinterpretations were made, Cardinal Sarah himself had made it clear in his July 5 speech that he was neither mandating nor legislation a change to the Mass. He stated: “I believe that it is very important that we return as soon as possible to a common orientation, of priests and the faithful turned together in the same direction—Eastwards or at least towards the apse—to the Lord who comes, in those parts of the liturgical rites when we are addressing God.”

“This practice is permitted by current liturgical legislation,” Cardinal Sarah stated, adding that “it is perfectly legitimate in the modern rite.”

The cardinal added that priests' “pastoral judgement will determine how and when this is possible, but perhaps beginning this on the first Sunday of Advent this year … may be a very good time to do this.”

In his statement, Fr. Lombardi said it is good to remember that the General Instruction of the Roman Missal, n.299, states that “The altar should be built apart from the wall, in such a way that it is possible to walk around it easily and that Mass can be celebrated at it facing the people, which is desirable wherever possible. The altar should, moreover, be so placed as to be truly the center toward which the attention of the whole congregation of the faithful naturally turns.”

On the other hand, the Congregation for Divine Worship issued a response to a question about GIRM n.299 in 2000, saying it does not exclude that the priest might offer Mass facing the apse – that is, in the same direction as the faithful.

Despite the fact that the celebration of Mass ad orientem is a legitimate option in the ordinary form of the Roman rite, some ecclesial leaders were quick to oppose the suggestion made by the head of the Vatican's department on worship.

Cardinal Vincent Nichols of Westminster wrote a letter to the priests of his diocese discouraging them from saying Mass while facing the same direction of the people.

While acknowledging that the Congregation for Divine Worship has confirmed that liturgical law allows priests to offer Mass while turned in the same direction as the people, he nevertheless suggested this is an illegitimate personal preference.

Mass is “not the time for priests to exercise personal preference or taste,” Cardinal Nichols wrote, according to the Catholic Herald.

Fr. Lombardi also used his statement to add in a comment that Pope Francis “has expressly mentioned that the 'ordinary' form of the celebration of Mass is that provided by the Missal promulgated by Paul VI, whereas the 'extraordinary', which was permitted by Pope Benedict XVI for the purpose and in the manner explained by him in the Motu Proprio Summorum Pontificum, must not take the place of the 'ordinary.'”

In Summorum Pontificum Benedict XVI had, in fact, not merely permitted the use of the extraordinary form, but had rather clarified that it was “never abrogated.”

Fr. Lombardi then reiterated that “there are therefore no foreseen new liturgical directives starting next Advent, as some have improperly deduced from some of Cardinal Sarah’s words.”

He added that “it is better to avoid using the expression 'the reform of the reform', in referring to the liturgy, since it can at times be a source of misunderstandings.”

Cardinal Sarah had said we cannot “dismiss the possibility or the desirability of an official reform of the liturgical reform,” adding that “if we are to implement Sacrosanctum Concilium more faithfully, if we are to achieve what the Council desired, this is a serious question which must be carefully studied and acted on with the necessary clarity and prudence.”

The cardinal had also recommended that a “full and rich celebration” of the extraordinary form of the liturgy “should be an important part fo liturgical formation of clergy,” reasoning that “how can we begin to comprehend or celebrate the reformed rites with a hermeneutic of continuity if we have never experienced the beauty of the liturgical tradition which the Fathers of the Council themselves knew?”

Fr. Lombardi concluded, saying, “all this was expressly agreed during a recent audience granted by the Pope to the same Cardinal Prefect of the Congregation for Divine Worship.”