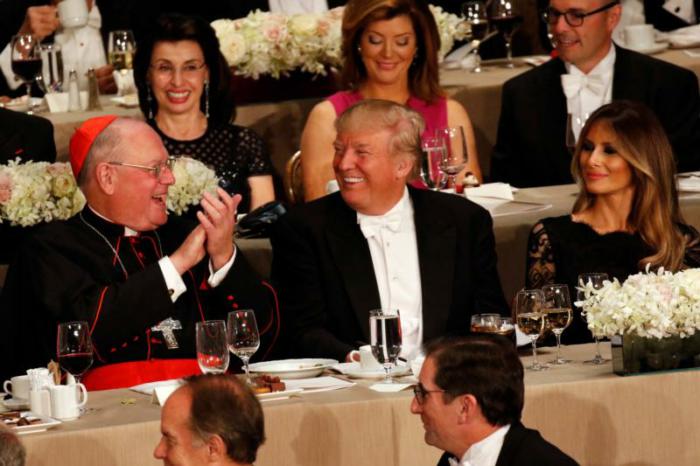 "I am honored to have been asked to offer a reading from Scripture at the upcoming presidential inauguration, and look forward to asking almighty God to inspire and guide our new president and to continue to bless our great nation," Cardinal Dolan said in an email to Catholic News Service.

Trump, a lifelong New Yorker, will be sworn in as the 45th president of the United States Jan. 20.

According to the president-elect's inaugural committee, other faith leaders who are scheduled to be present include the Rev. Samuel Rodriguez of the National Hispanic Christian Leadership Conference; Paula White of New Destiny Christian Center; Rabbi Marvin Hier, dean and founder of the Simon Wiesenthal Center; the Rev. Franklin Graham of Samaritan's Purse and the Billy Graham Evangelistic Association; and Bishop Wayne T. Jackson of Great Faith Ministries International.

The Washington Post reported in a Dec. 21 story that Trump is scheduled to attend "a private family church service at St. John's Episcopal Church near the White House," where many previous presidents have worshipped just before being sworn-in.

A day after the inauguration, Trump is expected to attend the 58th Presidential Inaugural Prayer Service, an interfaith service at Washington's National Cathedral.

"The cathedral is a sacred space for the nation to come together at moments of national importance, including the inauguration of our presidents," officials for the cathedral said in a statement. "The Inaugural Prayer Service is a moment for our next president to pause and contemplate the incredible responsibility he has been entrusted with and to listen as the faith community offers prayers for the office of the president."

In October, Cardinal Dolan hosted Trump and his then-rival for the presidency, Democratic nominee Hillary Clinton, at the 71st annual dinner of the Alfred E. Smith Memorial Foundation. The charitable gala, which drew 1,500 people, is named for a former governor of New York who was raised in poverty and who ran for president in 1928. Smith was the first Catholic nominated by a major political party to run for the nation's highest office.