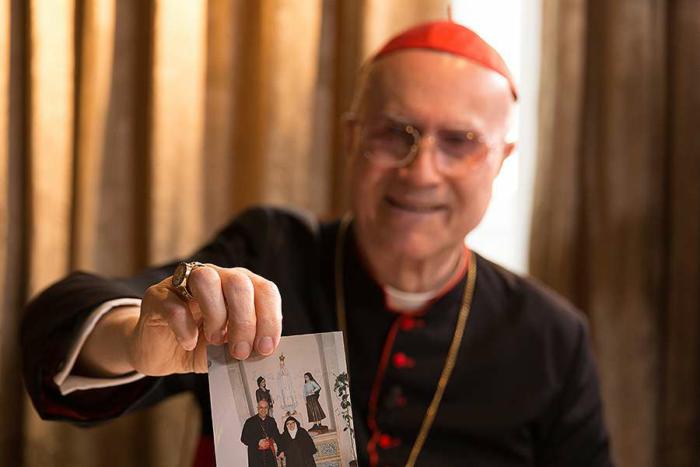 Fatima, Portugal, May 12, 2017 CNA/EWTN News.- The third secret of Fatima deals with past events, but at the same time its call to conversion is always current, always up to date, said Cardinal Tarcisio Bertone, Vatican Secretary of State emeritus.

In an interview with CNA, Cardinal Bertone spoke about the third secret of Fatima, how the decision to release the secret was made, and his memories of his three meetings with Sr. Lucia, the longest-living of the three shepherd children who had been the custodian of the secret until it was released by the Vatican at the request of Pope John Paul II.

This year marks the 100th anniversary of Our Lady of Fatima’s appearance to three shepherd children in 1917. Pope Francis is making a two-day pilgrimage to Fatima May 12-13 to celebrate the centenary and to canonize two of the children, Francisco and Jacinta Marta.

The “third secret of Fatima” refers to a message during the apparitions predicting suffering and persecution of the Pope and the Church. Unlike the first two secrets – a vision of hell and a prediction of World War II – the third secret was not initially revealed by Sr. Lucia. At first, she said that Mary had not yet permitted her to reveal it to the world. Later, the Vatican chose to keep it secret until 2000, when it was finally revealed.

The Fatima apparitions “confirm some encouraging news,” Cardinal Bertone said, “that the Mother of the Son of God Incarnated and Our Mother does not abandon humanity in the course of history. She is present, and watches over humanity as the spokesperson and guarantor of God’s Mercy. She is the mediator of salvation.”

On his way to Portugal for his 2010 apostolic trip, the cardinal noted, Pope Benedict XVI stressed that in addition to referencing the suffering of Pope John Paul II, the third secret points to realities involving the future of the Church, “which are gradually taking shape and becoming evident.”

That means, he added, that “the vision implies the need for a passion of the Church, which naturally is reflected in the person of the Pope, yet the Pope stands for the Church and thus it is sufferings of the Church that are announced. The Lord told us that the Church would constantly be suffering, in different ways, until the end of the world.”

“In the ‘mirror’ of this vision we see passing before us the witnesses of the faith decade by decade,” he added.

“In one sense he (Cardinal Ratzinger) says that the events described in the third secret are now past,” Cardinal Bertone said. “At the same time, the heart of Fatima’s appeal deals with conversion. That is, the conversion of the faithful and the path of the Church towards fidelity. Sr. Lucia really cared about accomplishing what she calls the ‘mandamiento de Maria,’ the commandment of Mary. Just as there is the Lord Jesus’ commandment, ‘Love one another as I loved you,’ there is also Mary’s commandment, ‘Do whatever he tells you’.”

Cardinal Bertone said that the decision to release the third secret of Fatima was made in order to avoid the “apocalyptic interpretation” that was spreading more and more at the end of the millennium.

Cardinal Bertone shared with CNA that Sr. Lucia was “a bright, very nice, serene, peaceful and calm person. She was a confident person who had to keep a great secret and was called to communicate important messages to humanity.”

The cardinal also shared details about his last meeting with Sr. Lucia. He said that one of the main topics of their last conversation was about the meeting Sr. Lucia had on July 11, 1977 with Cardinal Albino Luciani, then Patriarch of Venice.

Cardinal Luciani would be elected Pope John Paul I on Aug. 26, 1978, and his papacy would last only 33 days. Many reports said that Cardinal Luciani was shocked by the meeting he had with Sr. Lucia, since she would allegedly predict both his election as a pontiff and his very short pontificate.

In fact, Cardinal Luciani had drafted a report of his meeting, and Cardinal Bertone had brought this report with him, in a translation in Portuguese that Sr. Lucia had requested.

Cardinal Bertone recounted: “She carefully read the report, and then confirmed every word and signed it at the very end. I then asked a precise question: ‘Did you predict Cardinal Luciani’s election as Pope?’ She answered, with these very words: ‘I do not remember if I told him he was going to be elected Pope. I told my religious community that I had met a good cardinal, a holy cardinal, and that if he was elected Pope, he was going to be a good Pope’.”

Cardinal Bertone added that the discussion between Cardinal Luciani and Sr. Lucia dealt with the decline of faith in the Church and other general problems of the Church.

The cardinal also recalled that Sr. Lucia said the Virgin was satisfied by the consecration of Russia to the Immaculate Heart of Mary.

During the apparitions, Our Lady of Fatima asked that the Pope consecrate the world to the Immaculate Heart of Mary, with a special mention of Russia, in union with the bishops of the whole world.

Both Pius XII and St. John Paul II consecrated Russia to the Immaculate Heart of Mary, although there was not an explicit mention to Russia itself – a detail that brought many to suggest that in fact the consecration had not fulfilled Our Lady’s request.

Cardinal Bertone underscored that the choice not to mention Russia directly was made “for ecumenical reasons” and out of “respect for the Russian Orthodox Church,” but he also stressed that the references to it are very clear. In particular, he recalled Pope Pius XII’s 1952 Apostolic Letter Sacro Vergente Anno, which clearly speaks about the “consecration of the people of Russia.”