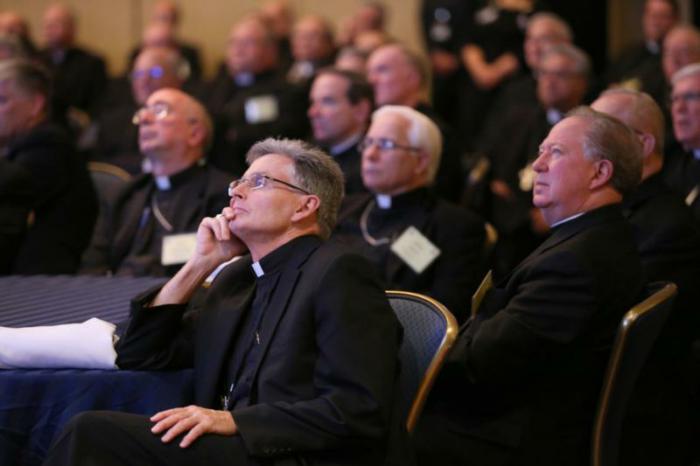 Prelates watch a video during the Nov. 12 centenary presentation in Baltimore for the U.S. Conference of Catholic Bishops. The celebration was held on the eve of the bishops' fall general assembly. (CNS photo/Bob Roller)

BALTIMORE (CNS) -- Assisted suicide and abortion remain the focus of the U.S. Conference of Catholic Bishops' Committee on Pro-Life Activities, according to Cardinal Timothy M. Dolan of New York, the committee chairman.

One of those issues was being taken up by the American Medical Association House of Delegates as the U.S. bishops held their fall general assembly in Baltimore Nov. 13-14.

The AMA House of Delegates was meeting concurrently with the USCCB meeting and was likely to consider the June recommendation of the AMA Council on Ethical and Judicial Affairs to change the AMA's decades-long position against assisted suicide to one of "neutrality."

"In light of the complex and deeply contested nature of the issues at stake, CEJA believes it is wisest to proceed cautiously and allow ample time for thoughtful reflection in developing its report," the AMA had said in a statement at the time.

In his remarks Nov. 13, the first day of the USCCB meeting, Cardinal Dolan lauded the bishops' longtime collaboration with the National Committee for a Human Life Amendment. "They have been with us for 45 years," since the 1973 Supreme Court decisions in Roe v. Wade and Doe v. Bolton that allowed legal abortion virtually on demand, Cardinal Dolan told his fellow bishops.

The national committee's Human Life Action arm was busy over the past year, issuing alerts urging Congress to pass the Conscience Protection Act, and urging the House Appropriations Committee to nullify a District of Columbia law permitting assisted suicide. It also sought activists to ask senators to include protection for the unborn in their efforts to overhaul the nation's healthcare system, and to urge the Trump administration to issue an executive order to protect religious liberty.

Launched in August was a "condensed, tweetable" version of the anti-assisted suicide video "John's Story: Beyond Independence." "Born without arms, John Foppe speaks to a way of life beyond independence, namely inter-dependence: Together we are more," says a promo for the video.

The video is part of an initiative intended to foster greater respect for those with disabilities, help assuage people's fears of becoming debilitated, and cultivate a stronger coalition with leaders in the disability rights community.

"The young and healthy get suicide prevention ... while the sick and disabled get suicide assistance. Assisted suicide: an alarming double standard," says one of the initiative's messages. "Legalizing assisted suicide sends a clear message: You're better off dead than disabled," says another. "That's not autonomy, that's discrimination."

"Human Life Action educated and mobilized the grass-roots on the Conscience Protection Act through its Take Action Sunday initiatives," Cardinal Dolan said. The USCCB Office of Government Relations identified five states -- Alaska, Indiana, Maine, Pennsylvania and West Virginia -- as deserving of greater focus due to the possibility of "garnering the support of key senators in those states" for the conscience bill, he added.

Plans also are firming up for the annual "9 Days for Life" prayer and action campaign slated for Jan. 18-26. It is held at that time to wrap around the Roe v. Wade anniversary and the annual March for Life in Washington with affiliated marches around the country.

"One of the intentions will highlight the fundamental relationship between concern for migrants and refugees and respect for all human life," Cardinal Dolan said.

A new round of training for the Project Rachel Ministry for post-abortion pastoral care and outreach is scheduled for Feb. 19-22 in Washington.

"The training will focus on the central role of the sacrament of reconciliation, the theology of forgiveness, the unique role of the church in post-abortion healing ministry, and how to make the ministry known in a diocese as a work of evangelization," Cardinal Dolan said.