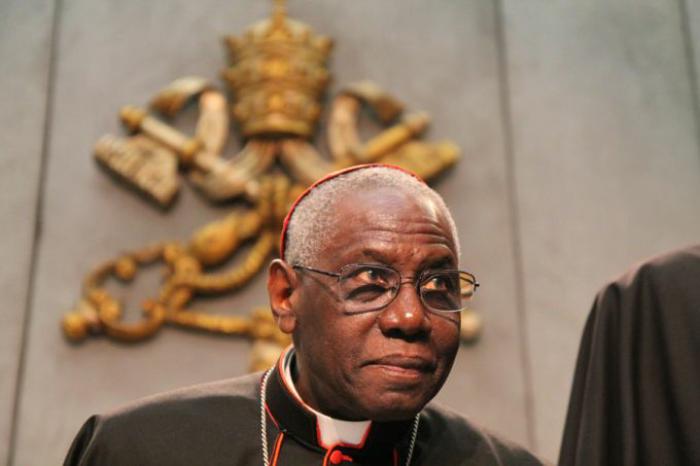 Cardinal Robert Sarah Prefect of the Congregation for Divine Worship and the Discipline of the Sacraments at the Vatican Feb 10 2015. Photo credit: Bohumil Petrik CNA CNA 2 10 15

Philadelphia, Pa., Sep 23, 2015 CNA/EWTN News.- Efforts to ‘soften’ Christian teaching on the family are not a solution for those wounded by sin, Cardinal Robert Sarah, a native of the west African country of Guinea, told the World Meeting of Families on Wednesday.

Rather, everyone can find healing through repentance and the heroic witness of families who welcome God’s mercy, the prefect of the Congregation for Divine Worship said.

“Even members of the Church can be tempted to soften Christ’s teaching on marriage and the family,” Cardinal Sarah said Sept. 23. “To varying degrees, the idea would consist in placing the Magisterium in a pretty box and separating it from pastoral practice, which could evolve according to such circumstances, fashions and emphases.”

He characterized this as “a form of heresy” and “a dangerous, schizophrenic pathology.”

But the cardinal had more to say.

“And this is precisely why we need Christ. Each of us needs him. Every person on earth needs him. Everyone is capable of sin, but they also may receive the mercy of God.”

“This is why repentance is good news,” he said. “The acceptance of the roots of sin within our hearts is wisdom.”

Cardinal Sarah’s comments came in his keynote address at the World Meeting of Families in Philadelphia.

His remarks follow several years of controversy ahead of the 2015 Synod on the Family. Several prominent bishops, including Cardinal Walter Kasper, a German, have been pushing to change Catholic practice on several points, including giving Holy Communion to the divorced-and-remarried.

For Cardinal Sarah, however, it is “the healing of the human family” that “makes us ready to receive the Good News, to welcome the mercy of God.”

He especially encouraged Christians to welcome those who need healing.

“We pass from death to life, through the power of the Holy Spirit,” he said. “This is not moralism. God’s grace comes before one’s duty. We reply to a divine initiative: all those wounded by personal sin, and the sin of others, the divorced and separated, those who have cohabited, who live closed in on themselves, or in all kinds of self-seeking unions, can and must find in the Church a place for regeneration, without any finger being pointed at them.”

Cardinal Sarah said the Christian family is called to testify that “love to the end is possible.”

“The world today needs saints with heroic witness to defend and nurture the family. By opening ourselves to God’s grace and his Holy Spirit living in us, our homes and families can allow goodness to enter the world.”

Citing Pope Francis, he said the family is “the wellspring of faith.” The family is “meant to spread its love to the world around it”

“Faith needs a place where it is gestated, transmitted, where it can grow, where it can become a lived experience. From the start of creation, God chose the family as this place,” the cardinal said.

Cardinal Sarah reflected on such consequences of original sin as breakdowns in relationships, personal strife, and moral problems such as addiction, abortion, religious persecution, and terrorism.

“If we do not go to the source, which is sin, nothing changes,” he said.

This is the root of the breakdown in the God-given understanding of the family at the beginning of creation and of “the darkness that has entered, contrary to his plan of the love and unity found in the Trinity,” he said.

He noted phenomena such as same-sex unions, cohabitation, a lack of openness to life, abortion, divorce, and unwillingness to care for weaker family members like the sick or old.

“Laws are passed that fuel this breakdown, from those killing the innocent form of life in the womb, to new form of unions, to euthanasia and assisted suicide,” the cardinal lamented.

At the same time, the cardinal encouraged the family as “a relationship of self-giving love” that is open to life and defends the dignity of life, while caring for the weak and the elderly.

“The family becomes the place where solitude, selfishness, egoism, find healing,” he said.

The cardinal recounted the example of Frank and Jean Palombo, the parents of ten children. Early in their marriage, Jean did not want any children and had left the faith. However, she returned to the faith after witnessing the Christian love of a missionary couple who were raising four children.

Frank, a New York City firefighter, died in the response to the Sept. 11, 2001 terrorist attacks on New York City. Jean forgave the terrorists and took consolation in the words of her children.

Jean herself died several years later of cancer. Their youngest child was raised by her many siblings, while their oldest son is about to be ordained a priest.

Cardinal Sarah said that despite the challenges of married life and family life, Frank and Jean Palombo were “granted the grace to love selflessly to the end … first by repenting, then by receiving and believing in the kerygma, the Good News.”

“The faith with which they lived, and their children still live, instills hope in us, that we too can bring the light of the Gospel into our words.”