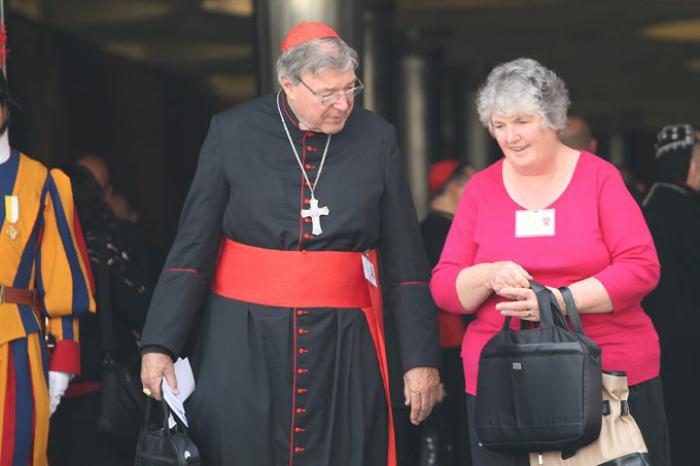 Cardinal George Pell leaves the Vaticans Synod Hall after a session of the Synod on the Family on Oct 13 2014. Photo credit: Bohumil Petrik CNA CNA 10 13 14

Vatican City, Oct 12, 2015 CNA/EWTN News.- The text of a letter allegedly written by 13 cardinals to Pope Francis is inaccurate, said Cardinal George Pell, prefect of the Vatican's Secretariat for the Economy, adding that the contents of private documents should remain private.

“I don't know what they did, exactly. Perhaps they attributed incorrect signatures to a wrong text,” he continued, as to how the errors could have been inserted into the text. “I am not the head of any lobby, I am just a messenger.”

The cardinal’s comments come in response to a report that he was among the signatories of an Oct. 5 letter to Pope Francis over whether this year's Synod on the Family lacked the “openness and genuine collegiality” needed to accomplish its purpose.

In the letter, 13 prelates allegedly addressed the Pope with the aim of alerting him to concerns that new procedures imposed on this year's gathering, in contrast to previous synods, could hinder the participants in their responsibilities.

The names of the 13 prelates, along with the contents of the letter, were published Oct. 12 by Sandro Magister.

However, representatives of at least four of the prelates listed – Cardinal André Vingt-Trois, Cardinal Angelo Scola, Cardinal Péter Erdõ, and Cardinal Mauro Piacenza – have denied that they signed the document.

In an Oct. 12 statement, a spokesperson for Cardinal Pell said that while there is strong agreement on most issues within the synod, “there is some disagreement because minority elements want to change the Church's teachings on the proper dispositions necessary for the reception of Communion.”

“Obviously there is no possibility of change on this doctrine,” it said.

“A private letter should remain private,” the statement continued, adding, “The Cardinal is aware that concerns remain among many of the Synod Fathers about the composition of the drafting committee of the final relatio and about the process by which it will be presented to the Synod fathers and voted upon.”

Asked about the letter at an Oct. 12 press conference, Vatican spokesman Fr. Federico Lombardi said he had “nothing to confirm about the document, as it was a confidential one.”

Offered in a “spirit of fidelity,” the letter released by Magister addresses the drafting of the final document to be submitted to the Holy Father at the conclusion of the synod, and the disproportionate degree of attention given to doctrinal and theological debates which take away the need to reinforce the dignity of marriage and family.

As a result of these procedural changes, there is “concern that the new procedures are not true to the traditional spirit and purpose of a synod,” the letter reads.

“It is unclear why these procedural changes are necessary. A number of fathers feel the new process seems designed to facilitate predetermined results on important disputed questions.”

One of the primary tasks of the synod fathers is to create the final document based in part on the Instrumentum Laboris (the “preparatory document”), parts of which the letter says require “substantial reflection and reworking.”

“The new procedures guiding the synod seem to guarantee it excessive influence on the synod’s deliberations and on the final synodal document.”

The letter highlights several ways in which signatories believe these procedures inhibit the production of the final document, as opposed to previous synods.

It voices concern over the absence of propositions, along with discussion and voting on them; the late timing of the vote on the final document, such that there will not be time for “full review and serious adjustment of the text”; the fact that members of the drafting committee for the final document were appointed rather than elected; and what is described as a disproportionate focus on the issue of Communion for the divorced and civilly remarried.

This year's Synod on the Family, which runs from Oct. 4-25, is the second and larger of two such gatherings to take place in the course of a year. Like its 2014 precursor, the focus of the 2015 Synod of Bishops will be the family, this time with the theme: “The vocation and mission of the family in the Church and the modern world.”