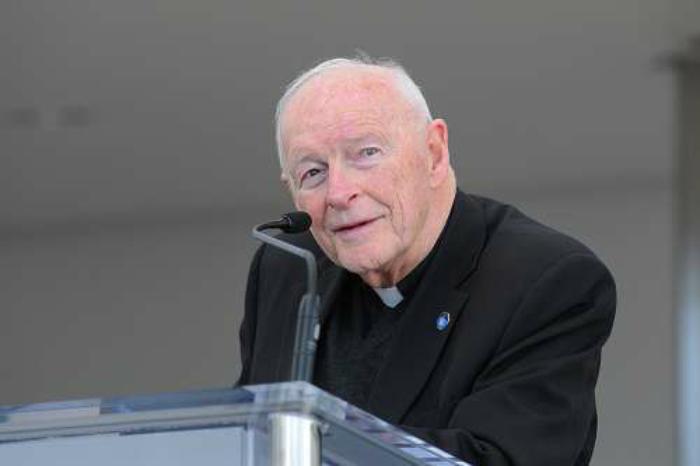 Vatican City, Jul 28, 2018 CNA/EWTN News.- Saturday Pope Francis accepted the resignation of Cardinal Theodore McCarrick from the College of Cardinals, and suspended him from the exercise of any public ministry.

July 28 Pope Francis accepted Cardinal McCarrick’s resignation from the cardinalate and applied a suspension ad divinis, which according to canon 1333 in the Code of Canon Law, prohibits him from acts of the power of order and governance and from the exercise of the rights or functions attached to his office.

The pope also directed Cardinal McCarrick to observe “a life of prayer and penance in seclusion” until the end of the canonical process against him, stated a July 28 press release from the United States Conference of Catholic Bishops.

According to a statement from the Vatican, McCarrick submitted his letter of resignation to Pope Francis Friday evening.

Only a pope can approve the resignation of a cardinal from his official status, and it is a measure which, historically, the Church has used very rarely – though this is the second time Pope Francis will have used the measure.

The first was in March 2015 when the pope accepted the resignation of the rights and privileges of a cardinal for Cardinal Keith O’Brien, who died in March.

O’Brien stepped down as archbishop of St. Andrews and Edinburgh in Scotland following the February 2014 revelation of allegations that he had participated in inappropriate sexual behavior with other men in the 1980s.

Because of the scandal, O’Brien recused himself from participating in the March 2013 conclave that elected Francis. In May 2013, after meeting with the newly-elected pope, O’Brien left Scotland for a time of prayer, penance and reflection. Almost two years later Pope Francis accepted his resignation from the cardinalate.

The Vatican’s decision to suspend McCarrick follows more than a month of unfolding allegations concerning the prelate.

On June 20, the Archdiocese of New York announced that it had concluded an investigation into an allegation that McCarrick had sexually abused a teenager, finding the claim to be “credible and substantiated.”

The Vatican was informed of that accusation, and as a result, Vatican Secretary of State Cardinal Pietro Parolin, by order of Pope Francis, prohibited McCarrick, 88, from public ministry.

Since that announcement, media reports have detailed additional allegations, charging that McCarrick sexually abused, assaulted, or coerced seminarians and young priests during his time as a bishop. The Diocese of Metuchen and Archdiocese of Newark disclosed that they had received reports that McCarrick engaged in sexual misconduct with adults, and reached legal and financial settlements in two cases.

The New York Times reported July 19 a Virginia man’s allegation that McCarrick began sexually abusing him in 1969, when the priest was 39 and the man, “James,” whose full name has not been reported, was 11 years old. McCarrick was reportedly a friend to the alleged victim’s family.

The man says that he continued to be sexually abused by McCarrick for almost two decades, the Times reported.

The man claims the abuse contributed to alcohol and drug habits that plagued him for years. He also says he attempted to disclose the abuse to his father several years after it began, but was disbelieved, according to the Times.