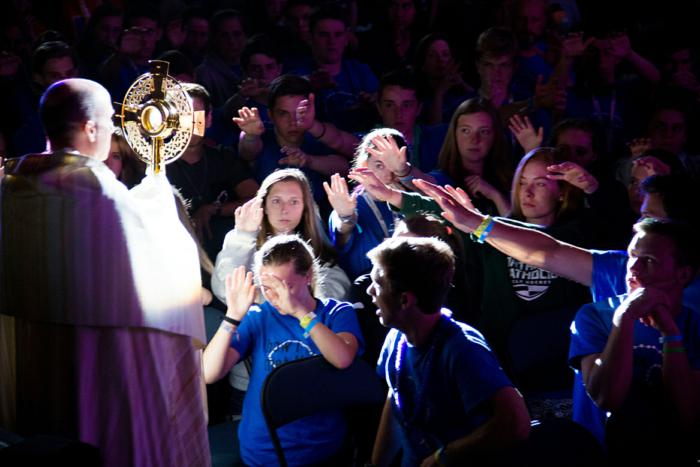 Young people extend their hands towards the monstrance with the Blessed Sacrament as it is brought through the assembly. Pilot photo/Mark Labbe

LOWELL -- This is the eighth year in a row Brittany Burkins has attended Life Teen's annual Steubenville East Conference, and for her, it's as much a family affair as it is a time to grow closer to Jesus.

"My mom chaperones the St. Cecilia's (Wilbraham) Youth Group, and my brother is kind of the leader. And my cousin is here, too, on the trip," she said, laughing.

Burkins, 22, said she used to help lead the youth group when she was a teenager, but now volunteers her time to work as security for the weekend event, which ran from Friday evening July 15 to Sunday afternoon July 17 at the University of Massachusetts Lowell's Tsongas Center.

I've participated "from the time I was going into my sophomore year of high school... The conference really impacted me in a positive way, and so I was really excited to give back to a conference that did so much for me, so I started volunteering as soon as I could," she said.

"This is my fourth year volunteering, my eighth year at the conference overall," she noted.

One of five Steubenville Youth Conferences held annually by Life Teen around the United States, Steubenville East is centered on providing teens and youth groups with an opportunity to meet other Catholics, all while attending numerous workshops, prayer sessions, talks, and music designed to teach about the Gospel's message and strengthen the youths' bonds with Jesus.

During his keynote, June 16, Hart spoke about Jesus' unconditional love for us, shown in his Passion.

"You have a God that loves you so much that he would rather die than spend eternity without you. That's a bold kind of love. That's the kind of love that demands a response," Hart said to the around 3,000 attendees filling the Tsongas Center.

"Jesus is going to be here in a few minutes. Why? Because love pursues. He's not okay with sitting back and waiting -- he wants your heart and he wants it now," he continued, referencing the period of Eucharistic Adoration that was to come after his keynote.

Eucharistic Adoration was held both Friday and Saturday, and volunteers noted that the periods of adoration are one of the attendees' favorite activities at the conference.

"It's really cool to see 3,000 teens and chaperones and all these volunteers coming together to celebrate the sacrament of the Eucharist. I just love seeing the teens get the best experience they possibly can out of it," Burkins said.

Natalie Thibodeau, a teen parishioner of St. Brendan Parish in Bellingham was attending her first Steubenville East, and called the adoration "moving."

"Even seeing everyone else's reactions to it was just really powerful," she said.

Those reactions included praying, weeping, and, in some cases, even fainting as the monstrance was brought around the center of the arena.

Sue Foder, an adult parishioner at the Parish of the Holy Spirit in Keene, N.H., said it was also her first time attending the event.

She said there is a "lot of energy here, and it appeals to the young children," she said.

"That's wonderful to see them release themselves," she continued, saying with a laugh that even an "old soul" like herself could relate to the youth's enthusiasm. 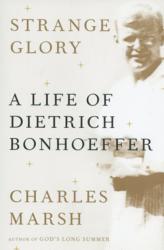