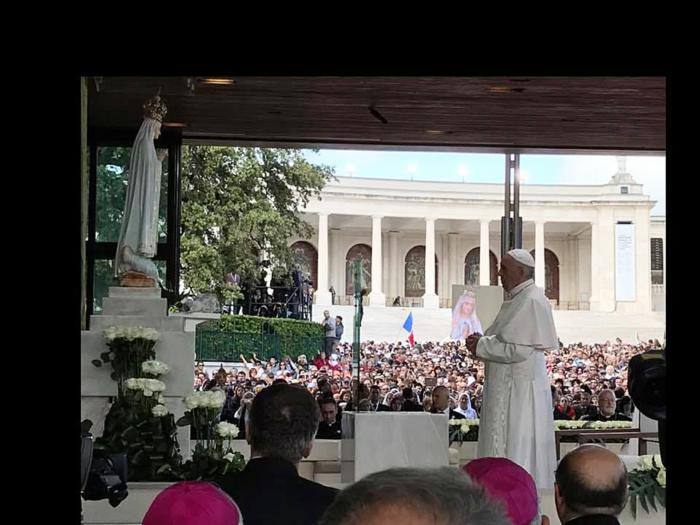 Pope Francis prays before the statue of Our Lady of Fatima in Fatima, Portugal at a gathering of the faithful to commemorate the 100th anniversary of the apparition of the Virgin Mary on May 12. Cardinal Seán P. O'Malley is seen in the bottom right hand corner. (Courtesy photo)

Fatima, Portugal, May 15, 2017 CNA/EWTN News.- Cardinal Sean O’Malley of Boston said that this weekend’s celebrations for the 100th anniversary of Our Lady of Fatima can teach us all about the universal call to holiness and conversion.

“I've always had a great devotion to Our Lady of Fatima,” he told CNA, adding that he’s been involved in Portuguese ministry for many years.

“I had a Portuguese parish for 20 years and was bishop of Fall River for 10 years, where half the Catholics are Azorean, and in Boston we have so many Cape Verdians and Brazilians – Portuguese speaking.”

The cardinal was the only U.S. bishop to attend the Feb. 13 festivities surrounding the 100th anniversary of the Fatima apparitions in Portugal.

He said that the shrine at Fatima is among his favorite, and said that “it's very moving to be here but especially be here with the Holy Father, for the hundredth anniversary and the canonization of Francisco and Jacinta. It's just an unbelievable occasion.”

Particularly touching for him was the offertory at the canonization Mass, when the gifts were brought up by the family of the young boy whose miraculous healing was attributed to the intercession of two of the Fatima shepherd children, Jacinta and Francisco Marto, paving the way for their canonization.

The young Brazilian boy, named Lucas, was just five years old when he fell out of a window from a height of 20 feet. His head hit the ground, and he sustained serious injuries and a loss of brain tissue.

Doctors told the family that the boy’s chance of surviving was low, and if he did survive, he would have severe cognitive disabilities or even remain in a vegetative state. However, after the family and a nearby religious community prayed to the young shepherd children, Lucas suddenly made a full recovery, with no lasting effects of the injury.

“I had heard the interview on the television, and he was given up for dead and the cure was so obviously miraculous,” Cardinal O’Malley reflected, “and to see that child come up and give the Pope a hug. It was...very moving and it reminded us that the canonization is about the holiness and the goodness of little children.”

Francisco and Jacinta are the youngest non-martyrs to be canonized, a fact which Cardinal O’Malley saw as significant.

“I think the lesson is that children are called to holiness…when they were beatified, Cardinal José Saraiva Martins who was the Prefect of the Congregation of Saints talked about how modern families entrust their children to professional teachers in schools for 15-20 years of formal academic formation but sometimes they’re not really prepared for life.”

“And these children, their parents were probably illiterate peasants but they taught them how to lead a good life, how to have a deep faith in God, how to love, how to serve, how to work,” he continued. “And in such a short life, they achieved great sanctity and holiness and the fact that the Blessed Mother chose them is very significant.”

Cardinal O’Malley said that the canonization is a reminder “a reminder of how precious children are and that they too are called to sanctity and parents have a great responsibility to transmit the faith to their children and prepare them for life – this life and eternal life.”

And beyond parents and children, the message of Fatima is a call to conversion for all people, he said.

“Jesus is calling us to conversion, calling us to discipleship, calling us to follow him to a life of holiness, to mission, to announce the kingdom by our lives,” the cardinal said, adding that “this is the message of Fatima and it's very, very relevant and very important.”