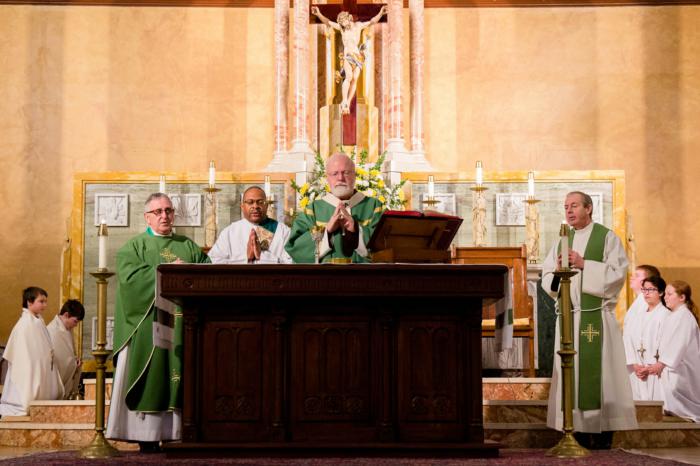 Cardinal O'Malley celebrates a Mass of Prayer and Penance for those affected by clergy sexual abuse at St. Michael Church in Lowell, Feb. 4. Pilot photo/Mark Labbe

LOWELL -- During a Mass of Prayer and Penance at St. Michael Church in Lowell, Feb. 4, Cardinal Seán P. O'Malley reiterated the Church's commitment to work for healing and reconciliation for all those affected by clergy sexual abuse.

"I am here today aware that many parishioners in this community were seriously affected. I wish once again to ask pardon and assure you of our commitment to work for healing and reconciliation," said the cardinal in his homily.

In the Church, the "work of healing and child protection is an ongoing task, a sacred one," he said.

The Mass was held in response to a call last year from Pope Francis for all episcopal conferences across the world to have a Day of Prayer and Penance in recognition of harm done by clergy sexual abuse within the Church. At the request of Cardinal O'Malley, all Masses held in the Archdiocese of Boston for Sunday, Feb. 4 were offered for Prayer and Penance.

In his homily, the cardinal requested prayers "for forgiveness of the Church, and healing for those who were harmed, "as well as for "those who have died from suicide and substance abuse because of what happened to them."

So much of Jesus' ministry was focused on healing, so, as his followers, "we also want to be a healing community," said the cardinal.

He acknowledged Vivian Soper, director of the Office of Pastoral Support and Child Protection, who was in attendance, and thanked her and her office for their work.

In the archdiocese, "we are grateful to our parish communities, schools, and agencies that work hard to ensure safe environments for our young people and vulnerable adults," he said.

"As a Church, we are committed to provide pastoral care and psychological help to all of those who have suffered from clerical abuse," the cardinal said.

Speaking to The Pilot following the Mass, Soper said she believes it is important, as the Church moves forward, to continue to remember the past.

"If we forget, we run the risk that it happens again. So, we have to forever remain diligent," she said.

"We need to never forget, too, that there were a lot of people hurt, and they're part of the body of Christ of this Church. When they're hurting, we're all hurting," she said.