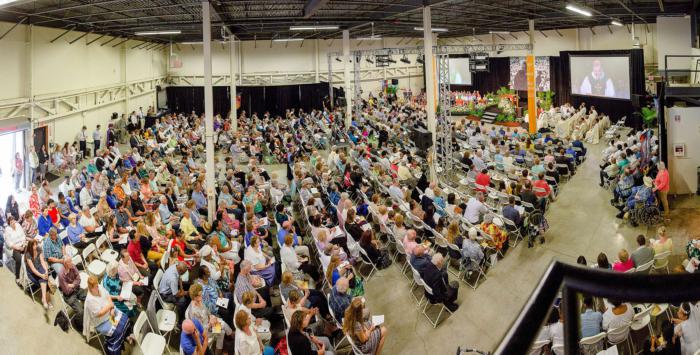 EASTON -- Father Patrick Peyton, CSC, used to attract great crowds for his Rosary Rallies. He still does. A large gathering of families and individuals turned out for an event to honor the American priest being considered for sainthood by the Vatican on June 10 at Holy Cross Family Ministries in North Easton.

The Prayer Celebration for Families was dedicated to the man known as the "Rosary Priest" to recognize his heroic virtue and holiness, and continue his legacy of family prayer.

Father Peyton, who died in 1992, devoted his life to the spiritual well-being of families through daily prayer of the rosary and preached at Rosary Rallies attended by millions of people around the world.

Over the years, Father Peyton advocated for families by preaching two powerful and memorable messages: "The family that prays together stays together" and "A world at prayer is a world at peace."

The Rosary Priest was also a media pioneer and used radio, television, film and billboards to spread his message of family unity. Today, his mission is continued by Holy Cross Family Ministries with many forms of free digital media and resources, including a video web series, www.CatholicCentral.com, eBooks and apps at www.FamilyRosary.org, a broad breadth of information and activities on www.CatholicMom.com, as well as the recently released documentary, "The Dating Project."

Pope Francis declared Father Peyton to be Venerable on December 18, 2017, bringing him a step closer to sainthood. The celebration was held to commemorate that declaration.

"'The family that prays together stays together.' These are among the most well-known and inspiring words in the world. They condense into one sentence the magnificent life and ministry of Venerable Patrick Peyton," said Father Willy Raymond, president of Holy Cross Family Ministries. "Father Peyton traveled the entire globe in his 51 years of priestly ministry proclaiming the unity, peace, joy and love that prayer and especially the family Rosary bring to God's Masterpiece -- the family."

An estimated 700 people participated in the celebration, which included eucharistic procession, rosary prayer and Mass to honor Venerable Patrick Peyton.

"Spreading devotion to daily family Rosary prayer was important to Patrick Peyton because he knew how it nurtured his family. The Peyton family gathered every evening to pray together. I believe all families can follow the example of John and Mary Peyton and pray with their children," said Father Raymond. "Prayer! Simple as that! Pray with your children today and see them grow to accomplish great things."

Various Peyton family members were at the event, including cousins of Father Peyton, Mary Lou Karch of Arlington, Virginia, and Susan Reynolds of Philadelphia. Television star Clarence Gilyard, noted for his role in "Walker, Texas Ranger" and an HCFM board member, read the Declaration of Venerability.

Holy Cross Family Ministries, which carries on the works of Father Peyton, is based at The Father Peyton Center in North Easton, with its media production company, Family Theater Productions, in Hollywood, California, and mission offices in 16 other countries. The ministry serves to inspire, promote and foster the prayer life and spiritual well-being of families throughout the world.