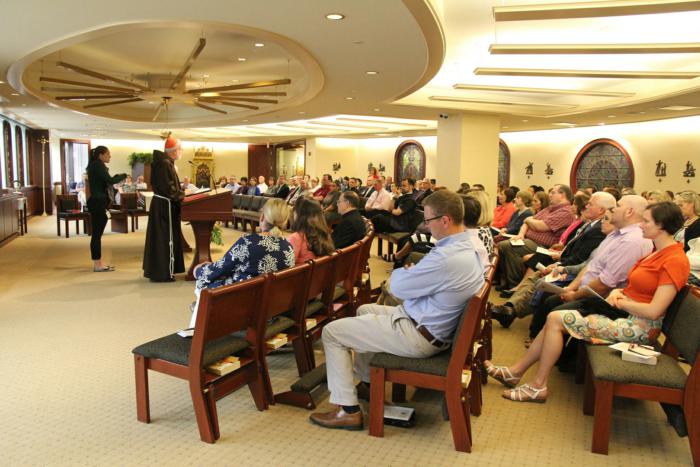 BRAINTREE -- Cardinal Seán P. O'Malley met with the employees of the Archdiocese of Boston Pastoral Center Aug. 21 to speak to them about recent and ongoing crises, including the resignation of former Cardinal Theodore McCarrick, the inquiry into allegations of misconduct at St. John's Seminary, and the Pennsylvania grand jury report revealing decades of child sexual abuse and cover-ups in the Church.

The meeting began with morning prayer in the Bethany Chapel. Reading from booklets with prayers for the Liturgy of the Hours, the assembly sang a hymn and read several Bible passages antiphonally.

After closing with a blessing, Cardinal O'Malley offered some words of encouragement and exhortation, acknowledging both the challenges the Church faces and the progress that has been made.

He reminded the assembly how the United States Conference of Catholic Bishops gathered in 2002 in Dallas to develop the Charter for the Protection of Children and Young People, a "watershed" document that established protocols for handling allegations of abuse and screening church volunteers and employees.

"We'd all love to have a quick fix for this problem, nobody more than me. In my 34 years as a bishop, 26 of them have been dealing with the sex abuse crisis. ... And every time I thought we were landing the plane and just getting a little bit of calm and peace, it would blow up again. Yes, it's part of our history, we have to live with it, we have to continually do penance for the mistakes of the past and recommit ourselves to make safeguarding our priority and to see that as the most important thing that we can do."

Cardinal O'Malley emphasized the "important contribution" of review boards nationally and locally. In addition to the National Review Board, each diocese has its own review board, which usually includes a combination of religious and laypeople, Catholics and non-Catholics, victims and their relatives. These boards examine cases of abuse and advise their bishops on whether they find accusations are credible.

"I've often asked rabbis to be on my review boards so that when people see the name they realize, 'Well this is an independent board, they're not all Catholics, these aren't employees from the Church, these are people with fresh eyes,'" he said.

The cardinal explained, "Because the cases usually are so old, they're beyond the statute of limitations. Government will not investigate, they will not prosecute, and yet the bishops in Dallas realized we can't just hold our hands and say, 'Well, if the government won't do anything, we can't do anything.' Well, we have to do something. And so that's why we came up with these policies and review boards so that every accusation is taken seriously."

He noted that some people argue celibacy is the cause of sexual abuse in the Church, but he countered this argument: "Most instances of child abuse are perpetrated by non-celibate people. Celibacy is an easy target, but it is not the cause. We have to work very hard to give our seminarians the human formation that they need to be healthy and holy ministers of the Gospel."

Cardinal O'Malley told the Pastoral Center employees, "This crisis of sexual abuse in the Church and the history that we have that we cannot forget, that we cannot jettison, calls us to go the extra mile, turn the other cheek, give our cloak along with the tunic, to do more, to be able to witness to our faith in Jesus Christ. We're not here by accident. We are here because of God's love. We are here with a purpose. We are here with a mission. And I'm so grateful to all of you who are a part of our staff at the archdiocese. I know how hard it is when people say, 'Where do you work?' But it is much appreciated and I know that God will bless you for your fidelity and your generosity."

Cardinal O'Malley drew a parallel between the Church's current situation and the account in Mark 4:35-21 when the disciples find Jesus asleep when they are in danger of drowning. The cardinal said, "Today we're in the perfect storm. But we know that Jesus is not indifferent. He's not asleep. He never promised an easy passage, but he promised that he would always be with us. And we must have confidence in his promises."