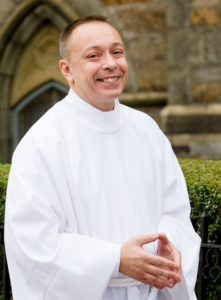 As the first member of the Brazilian community to be ordained a permanent deacon in the Archdiocese of Boston, he sees the need to live his life "in a very radical and significant way."

"Being married, having a day job, I think permanent deacons show to the world that it is possible to live a full Catholic life, to live Christianity in a very real and profound way," he said.

According to Deacon Torrens, his ordination was "a continuation of what I've been feeling for a long time."

Born in Curitiba, Brazil, Deacon Torrens first came to the United States in 1993 as a visiting scholar, first at the University of Michigan, then at Boston University, where he received a master's degree in psychology.

He always felt drawn to serve the Church, he said, but "I didn't even know about the diaconate until I was at a Mass with my wife and there was a deacon helping at the altar."

After learning about the permanent diaconate, Deacon Torrens immediately went to the Office of the Permanent Diaconate and met with Sister Mary Reardon, SND. Six months later, he began his studies.

"I think as a deacon, especially as a deacon working with the Brazilian community, my mission is to let people know that there is a way to live our faith in this world," he said.

He noted that the Brazilian community is largely made up of young people who "make the Church their home."

"If you're an immigrant and you're here, people tend to gravitate toward the Church," he explained, noting that much of his mission will focus on works of charity such as helping the poor, visiting prisons and the sick and homebound.

He also hopes to speak to others about the permanent diaconate, hoping others in the Brazilian community will "answer the call of God."

"I really believe there are many who will also be called to become deacons," he said, noting that there are currently two other Brazilian men studying to become permanent deacons.

Beginning this week, Deacon Torrens will be serving his parish, St. Anthony of Padua in Allston.