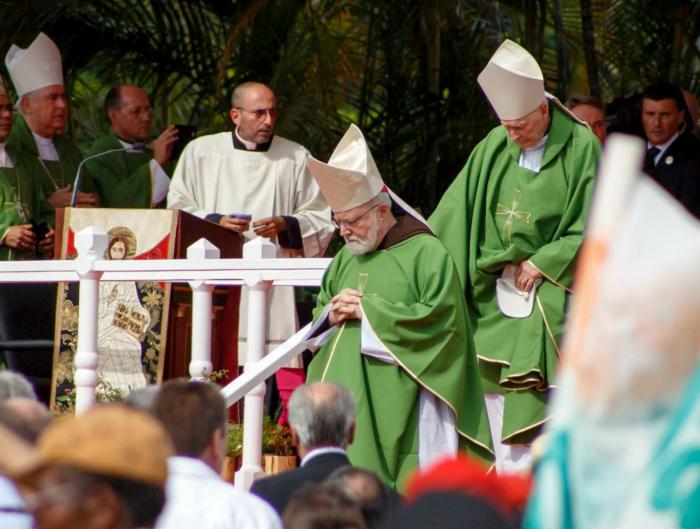 HAVANA (CNS) -- Pope Francis, celebrating his first Mass in Cuba, was flanked by three cardinals who, with him, have been credited with helping seal the deal between the United States and Cuba to move toward normalizing relations.

Cuban Cardinal Jaime Ortega Alamino of Havana was the host of the Mass Sept. 20 in Havana's Revolution Square. Seated in the front row of concelebrants were U.S. Cardinals Sean P. O'Malley of Boston and Theodore E. McCarrick, the retired archbishop of Washington, who continues to travel the world promoting peace and charity.

In July, the Cuban embassy in Washington re-opened and less than a month later the U.S. embassy in Havana did the same. Peter Kornbluh and William H. Leogrande, authors of the upcoming book, "Back Channel to Cuba: The Hidden History of Negotiations Between Washington and Havana," said negotiations had been going on for 18 months before Obama and Castro publicly announced the breakthrough.

Sen. Dick Durbin, D-Illinois, one of a group of senators pressing the Obama administration to act, suggested the administration seek the help of Pope Francis, Kornbluh and Leogrande wrote. To get a message to the pope, in early March 2014 supporters met with Cardinal O'Malley and sent messages to Cardinals Ortega and McCarrick.

When Obama met the pope March 27, 2014, Obama asked for the pope's help. The pope then sent a message to Cardinal Ortega. Later the pope wrote letters to both Castro and Obama urging them "to resolve humanitarian questions of common interest, including the situation of certain prisoners, in order to initiate a new phase in relations," the authors said.

The pope had sent the letters to Cardinal Ortega. Initially, he was unable to get Obama's letter to him, so Cardinal McCarrick went to Cuba to pick it up, the authors wrote. But Cardinal Ortega said he had to deliver it in person. A meeting was arranged in August.

Pope Francis invited U.S. and Cuban negotiators to the Vatican in October, which is where they worked out more arrangements of a prisoner exchange that was essential to the deal.

On the flight back from South America in July, reporters accompanying Pope Francis asked for more details about what he had done.

Pope Francis insisted his role was not "mediation." In January 2014, he said, he was asked if there was some way he could help. "To tell you the truth, I spent three months praying about it, thinking what can I do with these two after 50 years like this." He decided to send a cardinal -- whom he did not name -- to speak to both leaders.

"Months went by" and then one day, out of the blue, Cardinal Pietro Parolin, Vatican secretary of state, told him representatives of the two countries would be having their second meeting at the Vatican the next day, he said.

The new Cuba-U.S. relationship was the result of "the good will of both countries. It's their merit. We did almost nothing," the pope had said.