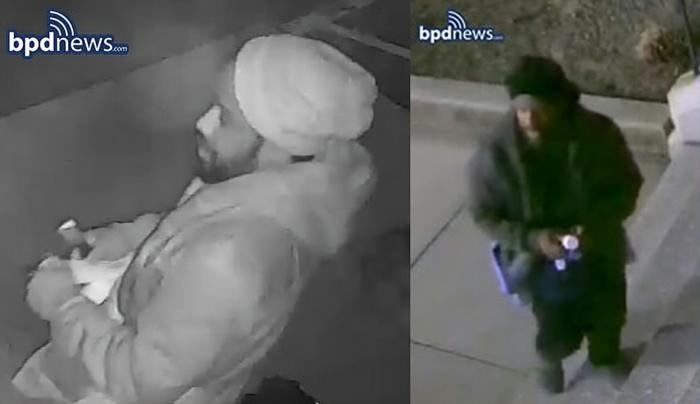 BOSTON -- Boston Police are seeking a suspect in the vandalism of two Catholic churches and a Catholic school, which was discovered on the morning of March 12.

In Dorchester, police were called to St. Teresa of Calcutta Church and St. John Paul II Catholic Academy around 6:30 a.m. An unknown substance had been discovered on several door locks, preventing the use of keys to enter the school building. The same substance was found on the locks of the church doors, and a circular bicycle lock had been placed on the door handles of the main front entrance doors.

That same morning, at 8 a.m., officers responded to a call from St. Monica Church in South Boston. The same substance, which pastor Father Peter DeFazio described as "some kind of putty," had been discovered on the locks of the church's doors. Additionally, a statue of the Blessed Mother had been knocked over, breaking her hands off.

Father DeFazio said it was the third or fourth time the Blessed Mother statue had been knocked over -- what he called an "incredible feat of strength," considering it weighs over 600 pounds. This was the second time her hands had been broken off as a result.

Last November, the parish installed the statue of the Blessed Mother along with statues of the Sacred Heart of Jesus and St. Vincent de Paul, having received them from another church. Since then, there have been multiple incidents of vandalism causing damage to the church's statues. In the early fall, the hands were broken off of the infant Jesus in the Holy Family display in front of the church. In November, the Sacred Heart statue was knocked down and smashed against a concrete wall.

Father DeFazio said they suspect it is the same perpetrator coming back. He said his parishioners are "very upset" and feel like the acts of vandalism are hate crimes directed at them.

"They'd really like the perpetrator to be caught. We're praying for him, though," Father DeFazio said.

At Mass, they have been praying "for his conversion of heart, that he gets the help that he needs, that whatever pain the person's undergoing, that he finds a better solution to dealing with it."

Security cameras at St. Teresa of Calcutta Church captured photographs of the perpetrator. In an announcement on their website, the Boston Police Department called for the public's help to identify the suspect, and "strongly urged" anyone with information to contact District C-6 Detectives at (617) 343-4742.