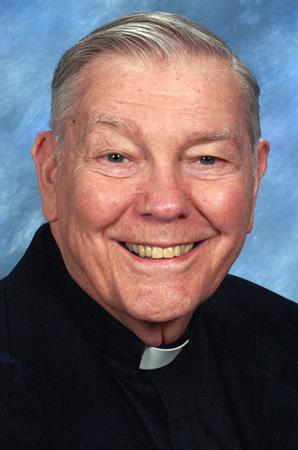 Father Joseph P. Smyth, a priest of the archdiocese with years of service in parishes, seminary, and as director of clergy personnel died at Regina Cleri Residence, Boston, on March 20, 2021.

Born on Sept. 20, 1928, in Cambridge, he was the only child of the late Joseph and Mary (O'Hara) Smyth. He grew up in St. Peter Parish and attended the parish elementary school before trekking on the MTA, now MBTA, to Boston College High School, then situated in the South End. Following his graduation from BC High in 1945, he went to Boston College and obtained a degree in mathematics graduating in 1949. He was granted a master of business administration from Harvard University in 1951. He served for two years in the recently formed United States Air Force; historians will note that he served during the Korean conflict.

Returning to civilian life, he worked for Ford Motor Company's New England Sales District before entering St. John Seminary as a member of the class of 1959.

At the venerable age of 30, he was ordained to the priesthood at Holy Cross Cathedral on Feb. 2, 1959. He served as an assistant at two archdiocesan parishes following ordination: St. Mary of the Assumption, Dracut (1959-1961), and St. Lawrence, Brookline (1961). He returned to academe in 1961 when he also returned to Harvard University, where his graduate work this time was in sociology. He was granted the Ph.D. from Harvard in 1969. While pursuing graduate studies at Harvard he was in residence in another Cambridge parish, St. John the Evangelist.

From 1965 to 1971, he was a member of the faculty of St. John Seminary College, where he taught sociology.

In 1971, Archbishop Humberto Medeiros named him director of the Priest Personnel Office. His years on the seminary faculty gave him a familiarity of the classes being ordained for whom he would be responsible to make recommendations to the archbishop for priestly assignments. He served in that position for two terms, 1971-1979. During that time, he lived in residence at St. Robert Bellarmine Parish in Andover. He had a good sense of what being a commuter meant as he trekked daily from Andover to Brighton, where the Personnel Office was located at the time. He was assisted in the office by two assistant directors as well as administrative staff.

He returned to parish ministry in 1979 when Cardinal Medeiros named him pastor of St. Mary Parish in Chelmsford. At the parish, he was admired above all for his presence. Parishioners happily relate about his availability, and especially, his well-prepared homilies and insatiable desire to learn something new each day.

During his terms as pastor in Chelmsford, he also served as vicar (1989-1995) in the Merrimack Region in what was then the Chelmsford vicariate.

He retired from the Chelmsford parish in 1998 and retired to his own residence in Nashua, N.H. Apparently commuting was not an issue because for the next 10 years he was regularly celebrating Mass at St. Bernadette Parish in Randolph.

In 2013, Father Smyth entered Regina Cleri Residence, where he has lived with fellow senior priests of the archdiocese.

Cardinal Seán P. O'Malley was to be the celebrant of Father Smyth's funeral Mass on March 26 at St. Joseph Church in Boston's West End. Among the concelebrants were to be Father Thomas Buckley, who served on the seminary faculty at the same time as Father Smyth, and Father J. Michael Lawlor, pastor of St. Paul Parish, Hamilton, who also served as the homilist.