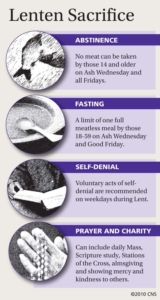 BRAINTREE -- The sacrifices of Lent fortify rather than deny the spiritual lives of Catholics, said Father Jonathan Gaspar the director of the archdiocese's Office for Worship and Spiritual Life.

He explained that the season of Lent emphasizes sacrifice by calling Catholics to prayer, almsgiving and fasting.

"These are the three, what we call, the disciplines of Lent," Father Gaspar said.

"When we start to engage these three spiritual disciplines of prayer, of fasting and almsgiving, then Lent is much more than a liturgical season. It becomes an opportunity for us to really experience conversion and growth in our faith," he said.

Father Gaspar also explained the guidelines for fasting and abstinence which, while always encouraged, become obligatory during Lent.

"They are similar to one another because they both deal usually with the intake of food. In the case of abstinence it is restrictions on the type of food that someone eats, so abstaining from meat. That is a universal abstinence," he said.

He said fasting refers to the quantity, rather than type, of food one eats. He said this means on days of fasting Catholics should eat one full meal and two smaller meals. The total food of the two smaller meals should not equal a full meal.

"The importance of fasting for us as Christians is that it teaches us self-control. It teaches us to deny ourselves. Something even as simple as denying ourselves chocolate or meat, as we all do as Catholics, it gives us a spiritual strength to be able to say no to illegitimate pleasures," Father Gaspar said.

Fish was once a food of the common people, associated with the working class or poor.

"Meat has always had a sort of connotation of being a luxurious food, a very rich food, and fish was always the poor man's food. Anyone could get fish. It was practically free," he said.

"That doesn't mean you can give up a burger and have a lobster on Good Friday. It doesn't make sense that way. It is about simplifying our meal, and seeing the spiritual value of our self-denial," he said.

Father Gaspar said self-denial remains important throughout the world spiritually and beyond the Catholic Church.

"In all the great religions of the world there is an expectation of their followers that there are going to be seasons of self-denial. I think we need to take self-denial very seriously, and especially in our world that tries to brainwash us into thinking that anything we want we should get, anything that stands in our way of getting what we want should be destroyed. We know that that is not Christ. Christ comes to show us that in order to receive we have to give," he said.

He said the liturgy of Ash Wednesday prepares Catholics for a season of sacrifice, denying oneself in the physical world to fortify oneself for spiritual encounter with Christ.

"The Scripture of Ash Wednesday is a Scripture of conversion, it is a strong call to repentance, fasting, and all of the disciplines that we are engaging in in these 40 days. The importance of placing it after the homily is so that people understand they are not just going through the motions, but that they understand what they are doing. Just as the ashes are placed onto our head, the priest or deacon says, repent and believe in the Gospel," Father Gaspar said.

He quoted from the liturgy of Ash Wednesday, as he explained that the Mass that day contains no penitential right because the Mass itself becomes a penitential act that day.

"Grant, O Lord, that we may begin with Holy fasting this campaign of Christian service, so that as we take up battle against spiritual evils we may be armed with weapons of self-restraint," the liturgy reads.

"So, the prayer of the Church teaches us something. What is Lent? It is a campaign of Christian service," he said.

Father Gaspar described the language of the liturgy as "beautiful, almost like this militaristic language, that Lent is supposed to toughen us up, supposed to prepare us for the battle between good and evil."