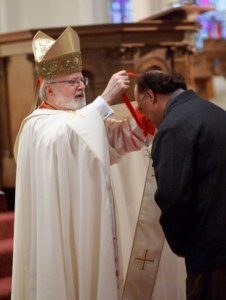 BRAINTREE -- Nearly 100 men and women from parishes across the Archdiocese of Boston will receive Cheverus Awards this year at a 3 p.m. prayer service Nov. 28 at the Cathedral of the Holy Cross.

Attendees will pray the evening Vespers for the first Sunday of Advent. A reception will follow in the lower level of the cathedral.

Cardinal O'Malley introduced the Cheverus Awards during the archdiocese's bicentennial year in 2008.

For the last two years, the awards have been presented on the Feast of Christ the King at an evening prayer service at the cathedral. This year, the feast falls on Nov. 21. However, since Cardinal O'Malley will be in Rome that day attending the consistory for new cardinals, the decision was made to delay the ceremony one week.

"The cardinal really thought about keeping it on the same Sunday, but he really wanted to be present for the Cheverus Awards," said Father Jonathan Gaspar, director of the archdiocese's Office for Worship.

The Cheverus Awards were inaugurated to recognize the service of men and women from across the archdiocese to their parishes, schools and other Catholic entities. Recipients are nominated by their pastors or auxiliary bishops and approved by Cardinal O'Malley. Lay men and women, deacons and religious are eligible for the award.

"It's an opportunity for the Church, the archdiocese and the cardinal to recognize the men and women who serve in extraordinary ways in their parishes, schools, hospitals and prisons," Father Gaspar said.

"It's important for the archdiocese to do this because we want to lift up good examples from our community -- men and women who have taken the faith seriously and chosen to live their faith in the Church by serving the needs of others and putting into practice the Episcopal motto of Boston's first bishop, 'Let us love one another.'" Father Gaspar added.

The Cheverus Awards were named for Bishop Jean-Louis Lefebvre de Cheverus, the first bishop of Boston. The awards consist of a red ribbon and a medallion bearing the likeness of Bishop Cheverus.