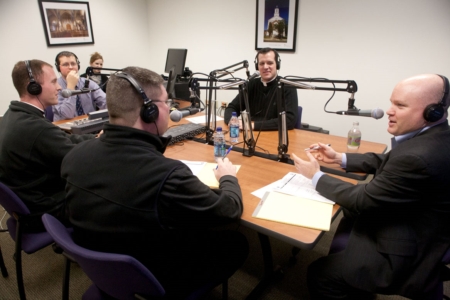 BRAINTREE -- Greater Boston will soon have its own locally-produced Catholic radio show devoted to local content.

Beginning on Ash Wednesday, March 9, "The Good Catholic Life" will air on WQOM, a Catholic radio station based in Natick. The show will broadcast live each weekday afternoon from 4 p.m. to 5 p.m. from the archdiocese's Pastoral Center in Braintree, and be hosted by Archdiocese of Boston Secretary for Catholic Media Scot Landry.

Landry said that when Cardinal Seán P. O'Malley formed the Catholic Media Secretariat in July 2010, he hoped to have a "presence in every vehicle" to disseminate the "good news" of the Catholic faith.

According to a program outline Landry provided to The Pilot, the program will discuss key archdiocesan initiatives, various aspects of Catholic teaching, profiles of Catholic leaders and current events from a Catholic perspective.

He will be assisted each day by one of several co-hosts, including such as Judicial Vicar Father Mark O'Connell; Office of Religious Education Director Susan Abbott; Office for the New Evangelization of Youth and Young Adults Director Father Matt Williams; and Father Chris O'Connor, vice-rector of St. John's Seminary.

Landry also said the program could include segments on local and national current events by a Boston Pilot staffer and editorial analysis by Father Roger Landry, executive editor of The Anchor, the newspaper of the Diocese of Fall River. Father Landry is the brother of Scot Landry.

"The Good Catholic Life" will also have a companion website, www.thegoodcatholiclife.com and the show will be available on iTunes.

The Ash Wednesday launch of the program is significant, according to Landry, because the show can promote ministries the archdiocese will be beginning this Lenten season, such as Catholics Come Home and The Light Is On For You.

Landry said the first episode will be a special two-hour program, and will include coverage of the archdiocese's official launch of Catholics Come Home.

The second hour will consist of a live broadcast of the Catholics Come Home kick-off Mass from the Pastoral Center, with Cardinal O'Malley as the main celebrant.

During Lent, the show will also focus on The Light Is On For You, the archdiocese's weekly confession initiative begun last year. This year, all churches and chapels of the archdiocese will be open for confessions on Wednesday evenings throughout Lent.

Landry also discussed the significance of naming the show, "The Good Catholic Life."

"We're all created to seek the good life. Everybody wants a deep sense of happiness and mission in this world," he said. "Our Catholic faith teaches us God created us to live according to his will."

"What we believe as people of faith is that the good life and the good Catholic life are synonymous," Landry added. "We hope the program can shed a lot of light on ways to live the Catholic life to the best of our abilities and share, through the stories of our guests, how that leads to deep fulfillment and happiness."

Landry said he sees radio as a valuable tool for evangelization.

"Radio gives guests the opportunity to not talk in sound bites," Landry said. "They can talk in-depth about the faith."

At the same time, he said, when people listen to the radio they are frequently in a situation where they can focus on a program for a longer time.

"When people listen to the radio, they tend to be less rushed," he said.

Landry is well-acquainted with the microphone, having broadcast Harvard University's basketball and football games as a student there in the early 1990s. In his more recent roles with the Archdiocese of Boston, he has appeared as a guest on several radio and television programs.

The producer of "The Good Catholic Life" will be Rick Heil, who interned with the Archdiocese of Boston's Catholic Media Secretariat last summer, helping to launch its new media initiatives.

Heil completed his music industry major at SUNY-Oneonta in December.

The goals of the program are to "raise awareness of the vibrance of the Catholic community" and "highlight the good things the Church does," according to Heil.

He also noted the importance of having local radio faith-based programming.

"To me, it's a logical next step to have a media outlet that's localized," Heil said.