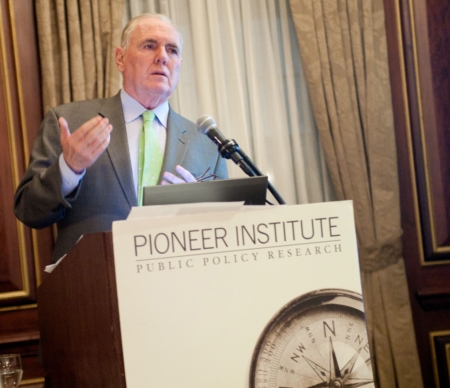 BOSTON -- It is time to lift state restrictions on aid to students in private schools, including Catholic schools, former Boston mayor and Vatican ambassador Raymond Flynn told a forum on school choice March 16.

Flynn keynoted a breakfast forum at the Omni Parker House Hotel hosted by the Pioneer Institute, a Boston-based public policy research organization, to discuss the merits of families receiving state aid to send their children to private schools.

The meeting also coincided with the release of "Be Not Afraid: A History of Catholic Schooling in Massachusetts," the institute's latest public policy paper released this month, that argues for the repeal of the so-called Know-Nothing or Anti-Aid Amendments.

"Pioneer has always had a longstanding interest in private school choice as a means to make sure inner-city kids have access to school choice," said Executive Director Jim Stergios.

The Know-Nothing amendments were revisions to the Massachusetts constitution in 1854 and 1917 that prohibited state aid to students in religious schools. They take their name from the nativist Know Nothing political movement of the mid-19th century formed to oppose the rising influence of Irish and German Catholic immigrants.

In his keynote address, Flynn said that many families currently cannot afford private education and a lack of state aid for this purpose constitutes discrimination against poorer families.

He also called the situation "an embarrassment to our country and our city."

Flynn encouraged school choice advocates to frame the issue as a means of creating opportunity for people.

An ensuing presentation by Patrick Wolf, an education researcher at the University of Arkansas, outlined the benefits of private education such as higher test scores and college graduation rates.

The presentation outlined options for achieving school choice, ultimately concluding that a repeal of the Know-Nothing Amendments is the best option.

Wolf discussed tax credits for families that send their children to private schools.

However, during the ensuing panel discussion the superintendent of the Medford Public Schools Roy Belson noted that Wolf's report does not account for special education students.

Speaking with The Pilot following the discussion, Belson said a better approach than enacting school choice legislation would be to share services such as professional development efforts and Title I funding, which provides federal money for supplemental educational programs for disadvantaged students.

"There's not enough resources to go around," he said.

McKersie discussed the benefits of private schools, the need for diversity in schools, the recent closures of archdiocesan schools and the creation of regional academies and importance of providing educational options for everyone.

"We need to find public policy options that support everybody in the educational marketplace," McKersie said.

Charles Glenn, an education professor at Boston University, pointed out that federal funds support special education even for private school students, but questioned why that is illegal under state law.

Yet, Norma Shapiro, of the American Civil Liberties Union, cautioned that school choice legislation would be unconstitutional.

"The Anti-Aid amendment is the freedom of religion amendment in the Massachusetts constitution," she said.

Shapiro also said that only public schools should receive public funds, which come from the taxpayers.

"These people depend on these funds," she said.

Stergios said that no move is currently afoot on Beacon Hill to repeal the amendments, but he said the repeal effort would take around three years.

"It takes that kind of focused planning, media planning and outreach planning to make sure you can convince people," he said.

Archdiocese of Boston schools superintendent Mary Grassa O'Neill, who was in the audience at the forum, said she was pleased with the insight it offered.

"It gives us the strength to look at what is a major social justice issue of our day," she said.