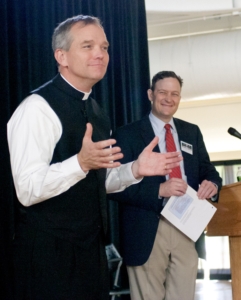 Father Douglas Martis and Christopher Carstens of the Liturgical Institute of the University of Saint Mary of the Lake, in Mundelein Ill. speak at the regional "Mystical Body, Mystical Voice" liturgy conference at Merrimack College. Pilot photo/Justin Bell

NORTH ANDOVER -- Over 500 hundred people attended a June 2 liturgy conference at Merrimack College, focusing on the changes of the Third Edition of English translation of the Roman Missal of the Mass. Those changes take effect this fall.

"I was just so pleased with the way everything turned out. We had a wonderful crowd today and the spirit of the crowd is a good indication that the Church is ready to receive this new translation," said Father Jonathan Gaspar, co-director of the archdiocese's Office for Worship, which organized the conference.

"Once we get beyond the fact that change is not easy, we can appreciate this occasion as a real opportunity to grow deeper into our love for the liturgy and eucharistic amazement," he added.

The all-day presentation gave a detailed theological analysis of the revised missal changes emphasizing a sacramental outlook of the Mass.

At times, Father Martis led the attendees by saying the new changes to the Mass. Then he and Carstens, a husband and father of five, would explain the reasoning behind the change. Their tag-team presentation style engaged the audience with a mix of humor and scriptural understanding.

Though not nearly as drastic as the changes to the Mass in the 1960s, priests and parishioners alike will be saying revised phrases of prayers starting on Nov. 27.

One example highlighted by the presenters was the word "cup," currently used in the consecration prayer of the Mass. In the revised missal, cup will be replaced with "chalice," a word that has a more distinct meaning.

Carstens built on this, giving an example of a new bride at the head table of her wedding reception and her choice of tableware.

"The bride is going to have at the head table not simple cups -- Styrofoam, plastic -- but goblets and crystal and the finest silverware," said Carstens. "Chances are she is not a liturgical theologian."

In another example, the two showcased the deep Old Testament connection behind the first Eucharistic Prayer in the Mass. Both translations recall Abel, Abraham, and Melchizedek, but the revised version has expanded language. Father Martis stressed the importance of being familiar with Scripture.

"If people don't know who Abel and Abraham and Melchizedek are -- even now in the words that we use during Mass currently -- then these words of the Roman Canon are simply going to be blah, blah. And people are going to go to Mass and they're going to hear Charlie Brown's teacher's, 'wah wah wah wah wah wah wah'" said Father Martis, mimicking the recognizable drone of the iconic comic strip character's teacher.

Martis and Carstens went on to explain the significance of the Old Testament patriarchs; that their names should point to Biblical narratives, essentially highlighting their offerings to God.

The final segment of the conference dealt with implementing the changes on a parish level with spiritual, intellectual, and practical preparation.

"The liturgy must be a place of unity, it can't be a battlefield where everybody's talking about their particular preferences," said the cardinal. "But it's a place where we all come together so that we can intersect with the mystery and Christ can touch our lives."

Father John Sullivan, pastor of St. Mary of the Annunciation in Melrose, said the conference was well presented and reminded him of his seminary training some 20 years prior.

"I thought it was explainable and understandable to everybody," said Father Sullivan.

The pastor already has held workshops for his parish leaders and a systemic plan in place for parishioners as the missal change approaches in the fall.

Mollie Kerrigan, 27, a youth minister from St. John Neumann Catholic Community in Merrimack, N.H. said the new translation of the Mass can build community and put people on the same level of understanding.

Asked if she is looking forward to when the changes begin, Kerrigan said, "Yes and no. I am excited for it, but I'm also nervous for the reaction of people. But I think if we stay positive and we have an atmosphere of positivity and excitement on the staff, than that will feed into the community as well."