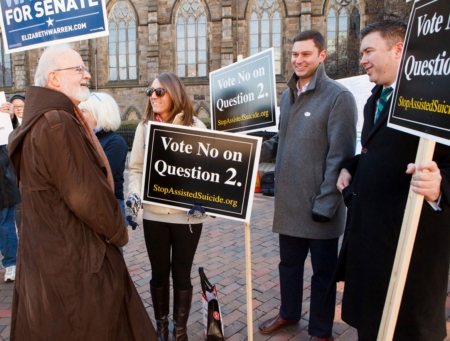 Cardinal Seán P. O'Malley chats with voters at a local polling place near the Cathedral of the Holy Cross in Boston. Pilot photo/Gregory L. Tracy

BOSTON -- After months of working to defeat Question 2 that would have legalized physician assisted suicide in Massachusetts, opponents reacted to the measure's apparent defeat Nov. 7.

As of press time, the ballot count stood at 1,496,291 opposed to 1,437,737 in favor of the proposal, with 99 percent reporting. Proponents of the bill at the Death with Dignity Campaign also conceded defeat in a statement released publicly early in the morning on Nov. 7.

Cardinal Seán P. O'Malley said in a statement, "Tuesday's vote demonstrates that the people of the commonwealth recognize that the common good was best served in defeating Question 2. The Campaign Against Physician Assisted Suicide brought together a diverse coalition from medical, disability rights and interfaith communities, all dedicated to ensuring that our residents were well informed about this issue."

The cardinal called for the medical community to move forward in providing medical support for patients, rather than helping them end their lives.

"Our society must continue to work with hospice organizations and other palliative care providers to improve the care provided to the terminally ill. Patients are best served when the medical professionals, families and loved ones provide support and care with dignity and respect," he said.

"I also want to thank every individual who shared information with their neighbors, colleagues and family members. It is my hope and prayer that the defeat of Question 2 will help all people to understand that for our brothers and sisters confronted with terminal illness we can do better than offering them the means to end their lives," the cardinal said.

Benestad worked closely on the effort of outreach to parishes in the archdiocese, in an educational campaign to address the realities of the ballot question.

"We learned early this morning that Dignity 2012 and those who were promoting the assisted suicide initiative in Massachusetts have conceded on Question 2. For us that was extremely, extremely good news. We are certainly chastened and conscious of the fact that this was a very, very close vote, and that there is a lot of work to do," she said.

Secretary of the Commonwealth William F. Galvin had not released official vote tallies at the time of Benestad's interview.

Peter Cataldo, chief healthcare ethicist for the Archdiocese of Boston, outlined the impact of the ballot outcome on the healthcare system from an ethical standpoint.

"I think it serves to preserve the integrity of the medical profession and to help the public to realize that suicide is not the answer to the needs of the terminally ill," Cataldo said.

Director of the Office for the New Evangelization of Youth and Young Adults Father Matt Williams reached out to young people during the campaign, and tracked results through the evening of the election into the following day.

"I praise God for the results of today. I thank God for the leadership of Cardinal Seán, who has been nothing less than heroic in leading the fight to defeat Question 2. Our pastors need to be commended for the work they have done on the front lines in mobilizing their people and helping to get the word out, and also our young people who we have seen that when they are presented with the truth about life and love, they respond. They become tremendous advocates for life. They become protagonists for the New Evangelization," Father Williams said.

President of Massachusetts Citizens for Life Anne Fox compared the role of experts who spoke out against the ballot question, with the role of voters at the polls, in a statement released Nov. 7.