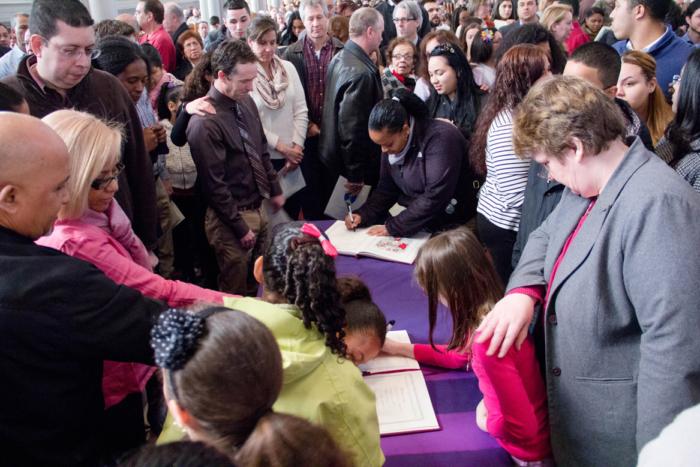 Catechumens -- those who have never been baptized -- sign the Book of the Elect at the Rite of the Election held at the Cathedral of the Holy Cross March 9. Pilot photo/Christopher S. Pineo

SOUTH END -- Nearly 650 of those preparing to enter the Church this Easter gathered at the Cathedral of the Holy Cross Feb. 9 for the Rite of Election and Call to Continuing Conversion held in cathedrals throughout the world on the First Sunday of Lent.

Due to a large number of catechumens and candidates -- a record number in recent years -- the archdiocese held two ceremonies for the different regions, West, North and South regions at 1:30 p.m. and Central and Merrimack regions at 4:00 p.m.

Cardinal Seán P. O'Malley said in his welcoming remarks that the rite begins a journey for the newly initiated to the faith, but also binds the Church universal as Catholics welcome new brethren in the season of Lent throughout the body of the faith.

"We are surrounded by Christians throughout the world who gather today for the Rite of Election, and here in this Church of Boston we rejoice that so many have heard the call of the Lord to follow him as his disciples in the Catholic Church," Cardinal O'Malley said.

Cardinal O'Malley also welcomed the catechumens and candidates with his homily.

"You new Catholics are God's gift to us, and we rejoice that you are responding to the prompting of the Holy Spirit to join our Church," he said.

After his homily, the cardinal began the Rite of Election for the catechumens and the Call to Continuing Conversion for candidates.

In the Rite of Election, the cardinal asked godparents if the catechumens were prepared sufficiently to receive the faith, before inviting them to sign the Book of the Elect. As catechumens signed, their godparents placed a hand of support on each one's shoulder in support.

In the Call to Continuing Conversion the cardinal asked if candidates had come to a deeper understanding of their baptism, reflected on the tradition of the Church, and advanced a life of love and service to others. As the godparents had stood behind the catechumens placing a hand on the shoulder of each, sponsors did the same for the candidates, and responded, "They have."

One catechumen and her godmother shared their common experience that brought them to the rite at the cathedral that day.

Madelyn Sang, 24, was raised in a home without a focus on religion, but said during times of trouble in her life she always felt love from a greater power.

"I have had a lot of bad things happen, and I have been through a lot, and I know that something has always been watching over me," Sang said.

She said she always wanted to be a part of the Church despite her family environment.

"It was something that was never spoken about, so it was either through TV or the internet that I would get my information. But, now that I am older and I have kids, I really want them to be a part of the Church," she said.

Following that call, the mother of two began volunteering at St. Augustine Parish in Andover where she learned more about the Catholic faith.

"I wasn't really raised in it, so I was going in not knowing absolutely anything. So, they were really bearing with me answering all my countless questions," Sang said.

At St. Augustine's, Sang met Klara Vajda, a native of Hungary, who became her godmother and guided her in her journey into faith.

"Madelyn started to volunteer for me 13 months ago, so we developed a kind of intimate relationship when we are talking about all the spiritual questions, the personal questions, and it just happened. Seven months later, she expressed that she would like to become the member of the Catholic Church," Vajda said.

Over that period of time, the two began meeting regularly with Mary DeFrancisco, who directs religious education for adults at the parish, attending Mass together, and addressing questions Sang had about the faith.

Because Vajda was raised in the Church in a faithful Catholic family under communist rule she never took the faith for granted and understood the importance of passing it on.

"Practicing religion was free at least on paper, but when came to practice it was really not free because there were consequences, negative consequences," she said.

Vajda said as a result of the family openly practicing their faith, her father never received a promotion or a raise in salary.

She said having encountered adversity herself helped her connect with Sang on a personal level as they worked toward the goal of Sang's future baptism.

"What fuels me? The knowledge that God is here always, and no matter what we can trust God," Vajda said.

By working with Vajda, Sang said she has realized the goal of not only receiving the faith but also set her sight on a new goal of passing her faith on to her children.

"They're going to get baptized the week after Easter, after I am already baptized," Sang said.