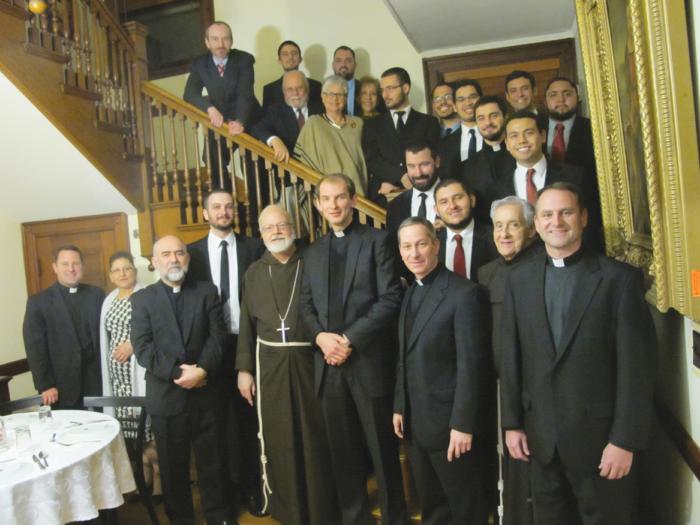 Last Thursday (3/6), I visited the Redemptoris Mater Seminary in Brookline for the institution of seminarian Andrea Filippucci as an acolyte. Pilot photo/CardinalSeansBlog.org

Last Thursday, I visited the Redemptoris Mater Seminary in Brookline for the institution of seminarian Andrea Filippucci as an acolyte. The ministry of acolyte is tantamount to the old sub-diaconate. The ministries, what used to be called minor orders, are important ways to stress the need for the spiritual, intellectual, human and pastoral formation that is necessary for a priest. It is a call to deeper commitment in one's process of formation. I was very happy to be able to gather with the seminary community as Andrea took this important step towards priesthood.

The Pro-Life Committee meeting was held on Monday and one of the subjects that was discussed was the experience of the March for Life this year which, despite the weather, had a great attendance. We spoke of the importance of having an ecumenical dimension in the events surrounding the March, which we have begun to do with the Orthodox, and the intention is to reach out to other groups as well.

We also talked about the training that was held in Washington for directors of Project Rachel programs from around the nation. Marianne Luthin, the director of our pro-life office, was very involved in leading the training. One of the things we have been trying to do in the Pro-Life Committee is to encourage the expansion of the post-abortion healing ministry Project Rachel in dioceses. Over the summer we sent out a questionnaire asking the Project Rachel directors if they would be interested in coming to Washington for a few days of training. Because we were anxious to have the directors attend, we offered to put them up in a retreat house, as long as they could cover the cost of traveling to Washington. This was a great help, especially for small dioceses with very limited budgets, and the response was just overwhelming.

Within a couple of weeks we had more attendees signing up than could fit in the retreat house. So, they found two other retreat houses to accommodate the overflow. Finally, they had to cap the registration once those two were filled.In all, there were 69 representatives from Project Rachel programs from around the country who gathered in Washington from February 23-26. It was the first time such a national training was held for Project Rachel directors.

The training program started from a prayerful perspective, seeking to explain the importance of Project Rachel to the pro-life movement, to the Church and also as part of the new evangelization, because we know that nearly one-in-three women of childbearing age in the U.S. has had an abortion (and, sadly, the figure is no smaller among women who identify themselves as Catholic).

Of course, the first outreach of Project Rachel is to the women who have experienced abortion, they are the ones who are most deeply affected, but also to men and all the other people who are involved, it really is the whole culture. Because of the enormity of the task, rather than having every diocese create its own structure, the USCCB has tried to take on a leadership role in providing information and training. We have developed a resource manual to help both priests and those directing the programs, and the directors will also be following up on this training program with webinars on topics they thought were worthy of further exploration.

In Boston, we have had just a very positive experience with Project Rachel helping those who suffer in the aftermath of abortion. We have had over 300 women participate in our one-day retreat program here. In fact, we have retreats coming up on March 29 and April 26. If you or someone you know is suffering as the result of an abortion, I urge you to call Project Rachel. In the Boston area, you can call 508-651-3100 or emailhelp@projectrachelboston.com. Be assured that all inquiries are strictly confidential.