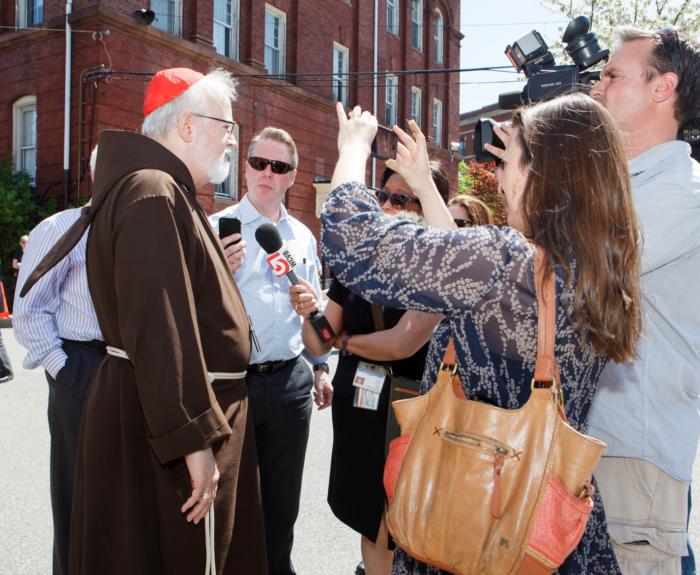 BRAINTREE --Cardinal Seán P. O'Malley told local media May 12 that the Archdiocese of Boston and the Catholic community in Boston take offense to the "black mass" scheduled that evening on-campus at Harvard University in Cambridge. He was speaking in answer to reporters' questions at an unrelated even at St. Peter's Teen Center in Dorchester.

"We have no way to prevent it other than to try and explain to people how evil this is," he said.

Controversy over the 'black mass' erupted earlier this week when it was reported that the Harvard Extension Cultural Studies Club will host the reenactment to be held May 12 at Queens Head Pub in Memorial Hall, on campus. The Satanic Temple, a group known for promoting controversy such as pushing to have a Satan statue built outside the Oklahoma Capitol, will perform what it called a reenactment -- said to be an "inverted" recreation of the Catholic Mass.

The cardinal said one can find out why it offends Catholics simply by looking up the phrase "black mass" on Wikipedia.

"A Black Mass is a ritual performed as a sacrilegious parody of the Roman Catholic Mass," the first sentence of the Wikipedia entry read at the time of this reporting.

"That says it all," the cardinal said, referring to the first sentence of the entry in the online encyclopedia.

Asked if the event would be similar to an event that had racist or anti-Semitic overtones, the cardinal said, "In some ways it is similar to that. Yes."

He also reacted to a statement from the university president Drew Faust, in which she said, "It is deeply regrettable that the organizers of this event, well aware of the offense they are causing so many others, have chosen to proceed with a form of expression that is so flagrantly disrespectful and inflammatory."

However, Faust also said she would not intervene to stop the satanic ceremony.

"Consistent with the University's commitment to free expression, including expression that may deeply offend us, the decision to proceed is and will remain theirs (the event's organizers)", she wrote.

Cardinal O'Malley said he was "disappointed" in the Harvard president's statement.

"I was hoping that Harvard would see how offensive and how evil this was, and at least ask them not to do it on their property," he said.