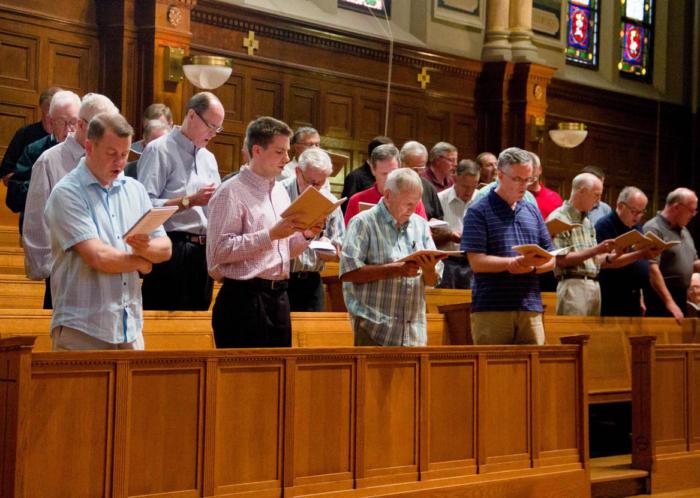 BRAINTREE -- For Father John Sassani, loving and serving Jesus Christ through the priesthood never struck him as work he could do alone -- only in collaboration with Christ and others through prayer.

Father Sassani, pastor at Sacred Heart and Our Lady Help of Christians parishes in Newton, spoke about the centrality of prayer in times of change, in his talk to kick off the Annual St. John Vianney Cookout held at St. John Seminary Aug. 7.

Held each year since 2005 around the time of the Feast of St. John Vianney, the patron saint of priests, on Aug. 4, the cookout provides a casual atmosphere for a time of priestly fraternity. The gathering traditionally includes a talk on some aspect of priestly ministry, followed by a vespers service and concludes with a cookout held on the seminary grounds.

Father Sassani said over time, as his duties and personal life changed throughout his priesthood, he had to recommit himself to living an intentional life of prayer through conversion to Christ.

"Conversion is the manner by which grace, and our response to grace, enables us to change. I don't know about you, but there are things always about me -- when I examine my conscience, when I go to confession, when I am in spiritual direction -- that I know I would like to change, but change comes slowly," he said.

He reflected on the rich young man who appears in St. Mark's Gospel.

He wondered if the rich young man of Mark 10:17 appeared again in the gospel, having further realized his faith.

"In the year that St. Mark's Gospel is read, the story of the Resurrection has what I thought was an oddity. The person at the tomb when the Disciples arrive is not an angel, as is true in the other three Gospels. It's a young man, dressed in a white robe, sitting in the tomb announcing the good news. I think St. Mark may be showing us what discipleship ultimately looks like, that it begins by our admiring Christ, and then we learn to imitate Him, difficult as that is, but sustained by a group like this -- people who assist us in our faith -- and certainly assisted by the Church at large, even in the middle of difficult times," he said.

In addition to giving examples of how his family and personal life had changed over his 34 years of his ministry, he reflected on a painting depicting the fifth Station of the Cross at the Campion Renewal Center in Weston. The painting shows pale Jesus, helped with his cross by Simon of Cyrene. He said he appreciates how similar each figure looks, with Christ only different in tone and bearing of the crown of thorns.

Father Sassani noted the shared workload in the painting in the context of collaboration under the archdiocesan pastoral plan Disciples in Mission.

"As we consider the collaboration that's going on in the archdiocese, and is going to continue to go on in the archdiocese for the foreseeable future, it's about jointly doing the work. We've certainly done that throughout the course of our priestly lives and are likely to do that for the rest of our priestly lives. But, one of the things that's different is it's not so much about each of us doing what needs to be done, it's about a collaboration, and Christ is the one who holds us together in order that we can accomplish it," he said.

"It seems to me that that makes a difference for the future, because it isn't just about priests doing their work, it's about priests, and religious, and laypeople working together, collaborating together for the well-being of other people, which is the work of evangelization. But I feel this is the good news, that Christ has chosen to partner with people like us in order to accomplish what he needs done in his Church, and the partnership makes all the difference," Father Sassani said.

During his homily at the vespers service following the lecture, Cardinal O'Malley thanked Sassani for his talk and pointed out the significance of events like the cookout.

"Our presence here is a very important way of building up priestly fraternity by praying together, by eating together and by being together," the cardinal said.

He also spoke about St. John Vianney. He recalled veneration of the heart of the patron saint of priests at the seminary chapel in 2006, when the relic traveled to the Archdiocese of Boston from Ars, France.

"The feast of St. John Vianney reminds us that holiness is an essential part of the priest's ministry. We need to study and learn about best practices and strategies, but at the end of the day it's the priest's interior life that will make all the difference," he said.

At the close of the vespers service, the vicar general Bishop Peter Uglietto thanked the cardinal for serving the Church for 44 years as a priest and 30 years as a bishop. The cardinal had just marked the 30th anniversary of his episcopal ordination Aug. 2.

Father Paul Sughrue, who serves in a collaborative at St. Elizabeth in Acton and St. Isidore in Stow, said he has attended nearly every Vianney Cookout since the tradition began.

"I just really love connecting with the priests, with the prayer, and with the talks in the comradery of a wonderful barbecue," he said.

Meanwhile, it was the first time attending the cookout for Father Thomas Macdonald, who was ordained in 2013 and serves the collaborative at St. Ann and St. Brendan in Dorchester.

Father Macdonald called the talk "a great reminder" and point to "the theme of collaboration, collaboration with Christ driving all of the ministerial, pastoral, collaboration that we face as a Church, as a local Church."