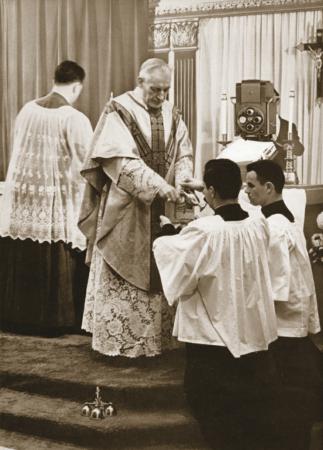 WATERTOWN -- When then Archbishop Richard J. Cushing celebrated Mass at the Catholic Television Center located at 25 Granby Street near Kenmore Square in Boston., Jan. 1, 1955, the broadcast may have been the first time the Catholic Mass reached the public via television airwaves and it also helped lay the groundwork for what is today The CatholicTV Network.

Msgr. Walter Flaherty, the founding director of what became The CatholicTV Network until his sudden death on July 16, 1976, had envisioned the use of television as a tool of evangelization and promoted the idea to Archbishop Cushing.

"He was a contemporary of Archbishop Fulton Sheen, and he had the wherewithal to recognize the power of this relatively new communications tool, that is to say television. He also was a man of deep faith, knowing that the Mass was central to our lives as Catholics. So it would not surprise me at all if, in fact, this was the very first live broadcast of the Mass, because I know that Msgr. Flaherty was very dedicated to the cause of evangelization in his day," said Father Robert Reed, president of The CatholicTV Network.

From that studio, with three cameras, the center produced live and pre-recorded programs. The center purchased time from local commercial television stations to air the Sunday Mass each week.

The Catholic Television Center, as it was called at the time, gained a license in 1957 to operate its own broadcasting station in Boston, channel 38, on the new-then UHF range of channels. It took the call sign WIHS, and began broadcasting on Oct. 12, 1964, transmitting from the Prudential Tower in Boston.

"It certainly is a source of pride for the Archdiocese of Boston that the archbishop at the time would have had the vision to dedicate a priest and resources towards the use of television in evangelization. And the fact that we have carried on that grand tradition for 60 years, with the very helpful support of our viewers, certainly is a gift not only to the archdiocese, but to the more than 14 million people who now appreciate and enjoy CatholicTV beyond the archdiocese, in New England, and throughout the country," Father Reed said.

Storer Broadcasting purchased WIHS, in 1966, and renamed the station WSBK-TV, which is today a CBS affiliate in Boston.

In 1983 BCTV brought it's programming to cable television, and through its own channel reached viewers as far away as Montreal, Quebec.

"Our goal is to remain competitive with secular media. Our big challenge is to make the teaching and the life of the Church as real and as interesting to people, to present the Gospel in an engaging manner amidst the cacophony without watering down the message. That's a huge challenge, but we have the tools to do it," Father Reed said.

In 2006, BCTV became CatholicTV with the slogan "America's Catholic Television Network." Now, The CatholicTV Network reaches more than 13 million households in Michigan, Hawaii, most of New England, Louisiana, Ohio, parts of Tennessee, the Virgin Islands and Vermont. In addition its programming is available throughout the United States via Roku and Google TV streaming channels.

Jay Fadden, general manager and executive vice president at CatholicTV, said the upcoming edition of CatholicTV monthly magazine will be dedicated to the 60-year history of CatholicTV.

"We are also putting together video pieces that will be broadcast on CatholicTV and on our social media platforms," he said.

CatholicTV uses new media and social media to reach an expanded audience on platforms like Twitter, Facebook, Youtube, and their own iCatholic App. Fadden said the outreach has generated feedback from all over the world.

"We get calls from all over the country, and in fact the world. We get donations from as far away as Japan, and even in the Middle East. It's really wonderful," he said.