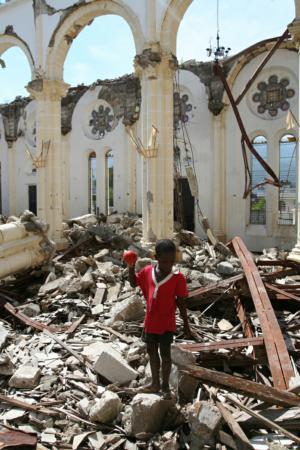 A boy wanders through the ruins of the cathedral in Port-au-Prince, Haiti in 2010. The cathedral, which has since been rebuilt, was among the many important institutions damaged or destroyed in the 2010 earthquake. CNS file photo/Barbara Fraser 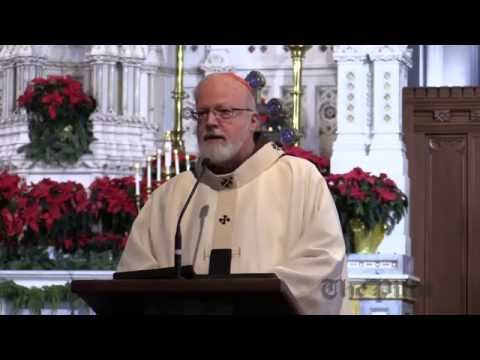 Vatican conference to show Haiti 'not forgotten' after quake

BRAINTREE -- With more than 80,000 people in Haiti still displaced internally five years after the 2010 earthquake, the results of the devastation remain tangible there and amongst the Haitian community in Boston.

"The earthquake of 12 January 2010 has marked the Haitian people in three ways," said Father Gustave Miracle, the parochial vicar at Church of St. Angela in Mattapan, which will host a Mass of remembrance on the anniversary.

"The country has never been through such an experience," Father Miracle said.

He said none of the previous six earthquakes had brought with them "such a long procession of corpses."

The second factor Father Miracle noted was the destruction of buildings and infrastructure in Haiti.

"The great buildings that have indeed marked the 20th century that housed the Haitian government, the Church and the civil society have collapsed," he said.

He pointed to the personal devastation for individuals and families in a society where "everyone has lost someone."

"It will take at least 25 years to heal this fracture internally, at the family level," Father Miracle said.

However, he also noted that the support of the international community and the Church came almost instantly as people became aware of the earthquake in real-time using new media and communication technologies through social networks.

He said an almost immediate show of solidarity resulted in direct support for those in need, particularly for those who immigrated to the United States to escape the devastation. He said many came to Boston within days of the crisis.

"Their constant presence in our various religious services and support programs make us understand that it will take a long time before they are cured of their inner wounds," he said.

He noted the support of Catholic charitable institutions such as Caritas Haiti, which provided support to the community in Haiti immediately after the quake, and Catholic Charities of the Archdiocese of Boston, which currently serves the Haitian community in Boston where many still bear the marks of the devastation and suffering.

Joseph Burnieika, who runs Catholic Charities Greater Boston and the Yawkey Center, said "It's not something that's overt. The folks that went through the earthquake, they don't tend to wear it on their sleeves, so to speak, but it's something that they will always carry with them."

The Haitian Multi Service Center in Dorchester provides socialization programs and educational opportunities for the Haitian community locally, with programs for the elderly, students and families.

"As difficult as it has been for many of the survivors of the earthquake, it's remarkable how resilient the Haitian people have been," he said.

Marjean Perhot, director of Catholic Charities Refugee and Immigration Services, said many of the Haitians her office works with are seeking to renew temporary protected status they gained after the quake struck.

"Just from being with them for a short time, it's evident that there are people who are coming to us still dealing with the quake. It just seems like it's still pretty hard for folks," she said.